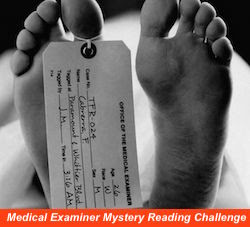 Once again Rick at the Rick Mills Project will be offering up the Medical Examiner Mystery Reading Challenge as well as the Six Shooter Challenge. I, having no self-control when it comes to challenges--especially mystery-related challenges, will--of course--sign up for both. He's got them both on deck for 2022 (as well as the fairly new Beachcomber Challenge), so here I go again....For full details, check out the link above. Basically, just read mysteries and log the murder methods on his handy form. [Tallies for 2022 begin after Christmas 2021.]

Welcome to the 2022 edition of the challenge! Perhaps you will be the first to wear the Lavender Lab Coat in 2022! - Rick