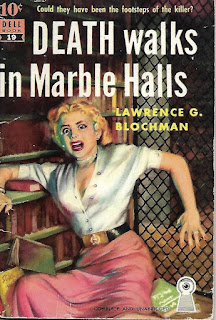 Murder runs amok at the New York Public Library. Phil Manning, with library press relations, has his hands full well before the grim reaper starts harvesting among the stacks. One of the library's trustees, H. H. Dorwin has put him on high alert with a telephone call saying he was his way to meet about an important matter. Then Manning's best girl Betty Vale calls saying that she must see him right away--with tones of desperation in her voice. Before he can attend to either of these matters, he hears a shot ring out in the main corridor. An untidy little man bolts down the hall and Dorwin is leaning against the wall, his face as pale as the marble flakes scattered about from where the bullet hit a bust of Sophocles instead of the director. Dorwin insists he's fine and that Manning should run after the library guard, Tim Cornish, who's running after the little man and bring them both back to the director. "No police!" he commands.

He doesn't quite get his wish...but by the time the police arrive, he's past caring, having become the first victim of the killer on the loose among the books. But, instead of being shot, he has been stabbed. Did the little man come back with a different weapon or is there someone else with reasons to eliminate a library trustee. I bet you've already guessed...there is. More than one. And they ALL decided that they needed to visit the library that very afternoon.... Even though the police have all the exits covered and all the suspects are supposedly blocked in the main area of the library, we still get a nice round of hide and seek among the stacks while Manning and Lieutenant Kilkenny try prevent too many patrons from being removed from circulation permanently.

This is a fun little novella. As much as I enjoyed my first Blochman (Midnight Sailing, reviewed a few days ago), this one ticked off more boxes for me. It has a tighter plot, better clues, and more interesting peripheral characters all packed into a story about four times shorter. I love the library setting and the slightly academic feel. Blochman provides an excellent description of the library's layout which is a great help in visualizing the murders and figuring out where who was when. It's shame that he didn't (according to the internet) do more of this style of mystery with the same main characters--this is only the second appearance of Kilkenny and his medical examiner Dr. Rosenkohl and the only appearance of Manning (who does most of the detective work here). A delightful mystery in a small package. ★★★★

First line: Long before the storm broke, Phil Manning had an uneasy feeling that something unpleasant was about to happen.

Deaths = 3 (one stabbed; one shot; one fell from height)