Murder at the Spring Ball 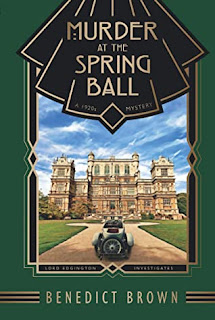 Murder at the Spring Ball (2021) by Benedict Brown

Set in England, 1925. After his beloved wife's death, Christopher Prentiss's grandfather and former Scotland Yard detective, Lord Edgington of Cranley Hall, had secluded himself from the world. He saw no one, not even the grandson who spends weekends at his home, and rarely ever left his rooms. At his seventy-fifth birthday celebration, a rare gathering of his entire family--from his dotty sister-in-law, Clementine, to his children, Christopher's mother, Belinda, and Maitland, to his grandchildren and great-niece--he suddenly announces that all that is in the past, Cranley Hall is to be refurbished and made ready for a grand Spring Ball in the style of past events. Even more astounding--he will need an assistant to help him get everything ready and he has chosen, of all people, Christopher.

The Cranley family (and extended relations) aren't the most loving of clans and immediately everyone is suspicious of Edgington's motives. Is he grooming Christopher to be his heir? What has that sneaky little teenager been up to on his weekends at Cranley Hall? Sucking up to old man, apparently. Christopher is just as astounded as the rest. As he tells them, he hasn't spoken one word to his grandfather since the time of his grandmother's death. And even as he begins to help Edgington with his celebration, he's still not clear why his grandfather chose him.

But Christopher proves an able assistant and everything comes together splendidly. The band is up-to-date, the food isn't too bizarre (given the Cranley Hall cook's penchant for strange pairings--like honey & haddock sandwiches), and everyone is having a good time. It's all going well until until Lord Edgington has the cork popped on a fifty year-old bottle of champagne presented to him (and his wife) on his wedding day. The bubbly is poured out for the family and he prepares to offer a toast. One of his greedy children can't wait for the speech, drinks their champagne, and promptly dies of of poison. If Belinda hadn't provided the warning, most--if not all--of the Edgington's family would have followed the same fate. The retired Scotland Yard Superintendent takes his grandson on as assistant detective and the duo set out to find the culprit before the family numbers are drastically reduced.

This was a fun, light historical mystery. Nicely clued in the Golden Age tradition and I enjoyed the duo of grandfather and grandson working together to solve the crime. They have an interesting relationship and, as there are more books in the series, it will be fund to watch it develop. Christopher is a shy, bookish young man who has been bullied at school and derided in the family. It was nice to watch him begin to blossom in his grandfather's company.

The story is told from Christopher's point of view--which is something to keep in mind as you read. He is observant, but doesn't always see things from the proper perspective. He's also prone to jumping to conclusions and several times he comes across a new clue, spins a whole theory, and declares "Case closed!" only to go through the same process when the next clue comes along. But he does get a bit better at interpretation as the case moves along. Overall, a nice debut to what looks like a good series.  ★★★ and 1/2.

First line: It must be strange to know that everyone in the room wishes you were dead.

...well, to paraphrase Oscar Wilde, "To lose one Cranley may be regarded as a misfortune; to lose two looks like a concerted plan of elimination." (p. 103)

Last lines: We pulled onto the road and he immediately accelerated. "Grandfather, let me out!"