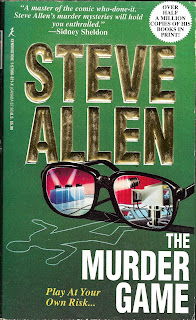 Steve Allen and his wife, Jayne Meadows, were staples of the 50s, 60s, and 70s panel game shows. Steve was perhaps best known for his appearances on What's My Line? and later served as host on an updated version of the show. Jayne was a long-standing panel member of I've Got a Secret. In this sixth installment of his mystery series, Steve uses their experiences in the panel game show world to full effect.

In this fictional account, it is twenty years since the famous game show, The Murder Game, went off the air. Jayne Meadows and three other celebrity panelists would go head-to-head with a panel of guests in the grand-daddy of detective-based game shows. The teams would watch short skits that gave them the victim, suspects and general outline of the crime. The game would provide them with opportunities to earn clues. The fewer clue rounds needed to solve the mystery--giving both who and why--the bigger the prize.

That game rivaled What's My Line? and I've Got a Secret in popularity and now the network has been sold on the idea of reviving the show for a modern audience. The original host (and creator of the show) Peter Grover and all of the original panelists are brought on board for the revival--even Jayne, although she's very reluctant at first. But when a few "accidents" happen to those connected with the show, she and Steve can't resist being involved because they gotten quite a taste for real-life mysteries. Then the show's panelists start dying one-by-one and their amateur investigation becomes deadly serious...if they don't discover the culprit soon, then they may find themselves permanent losers of the murder game.

This was a lot of fun. A few years ago, I went down a Youtube rabbit hole and watched every available episode of What's My Line? as well as many episodes of I've Got a Secret. I enjoyed the latter well enough, but it didn't hook me quite the way What's My Line? did. I am well acquainted with how those panel shows worked and saw a lot of Steve Allen and Jayne Meadows. It wasn't difficult to picture the scenes on the set of The Murder Game and I heard Steve's voice in my head the entire time I was reading this. The banter between him and Jayne is true to their onscreen behavior and was delightful to read. They also make pretty decent amateur detectives--though I will say that Steve plays the clues a little close to his vest. There are a few details that aren't shared until the big reveal at the end. The other thing that keeps this from a slightly higher rating is that it goes on just a little bit too long. Jayne figures out who did it and is all set to reveal all. Then a new clue pops up and she (or she and Steve) are all set to go chat up a new suspect and somebody new dies. The somebody new may or may not be the suspect we were going to chat up. That, in turn, causes Steve to decide that he's figured out who did it and is all set to reveal all...and off we go into another round. Set that for about four more repeats and...well, it was just a bit redundant. It didn't prevent me from having a good time though and I'm definitely up for another round of mystery-solving with Steve and Jayne. Which is good because I've got another of his books sitting on the TBR shelves... ★★★ and 1/2.

First lines: "Sorry," Jayne told the telephone. "On Thursday we have to be in Idaho or Iowa--one of those states that begin with an I."

Last lines: "Anything but a tuna sandwich, dear. We owe them too much."

Deaths = 8 (two vehicle accident; one drowned; one fell from height; one hit by garage door; one natural; one poisoned; one hanged)