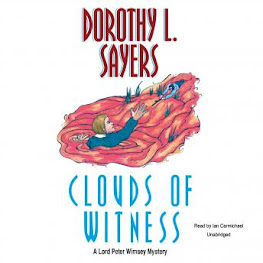 Lord Peter Wimsey's brother--Gerald, Duke of Denver--had gathered a small hunting party at Riddlesdale Lodge. All went well--there was plenty of game and decent company--until one of the guests turned up dead at the most unsuitable hour of three o'clock in the morning. And not just any guest--but the brother-in-law-to-be of Peter and Gerald, Denis Cathcart. The Duke is found crouching over the body. Lady Mary, sister to the Duke and Lord Peter, has secrets of her own and in covering those up manages to throw the light of suspicion ever brighter on her brother. There are all sorts of clues...mysterious footprints in the garden that belong to no one known, a disappearing letter full of comments about the dead man, a suitcase that travels from conservatory to hall oak chest to who-knows-where, a bejewelled cat charm, and tracks made by a motorcycle with sidecar. It will take all of Wimsey's wits, Bunter's way with the maids and barmaids, and Inspector Parker's ruthless routine to get to the bottom of the mystery. It all wraps up with the pomp and circumstance of the trial of a British peer in the House of Lords and an exciting last-minute burst of evidence on the part of Lord Peter to save his brother from the gallows.

I've been listening to audio books when I drive to work and then at work while doing mindless tasks. And when I listen to audio books, it works better for me if I listen to something I've already read--that way if I get distracted it doesn't matter and I won't lose the thread of the story or have to go back to pick it up again. The Lord Peter books are perfect for this--I've read them so often and love them so much that I can listen/read repeatedly and I never lose my enthusiasm for them. It's also lovely to pick up on new episodes or details that I either didn't notice properly before or that have never stood out in quite the same way. The last time I listened to I was struck by the courtroom scenes: the pomp and circumstance of the House of Lords and the impressive persona of Sir Impey Biggs (counsel for the defense) as well as the friendship between Lord Peter and Charles Parker. The friendship was still a highlight this time around--especially the gentle ribbing Peter gives Charles over his fascination with Peter's sister, Mary. And the end scene with Peter, Charles, and Freddy Arbuthnot found out and about after celebrating (a bit excessively) after Denver's acquittal is very amusing. Another good round of Wimsey and friends. ★★★★

First line: Lord Peter Wimsey stretched himself luxuriously between the sheets provided by the Hotel Meurice.