January Pick of the Month


Well, January has started the reading year off with a roar--even if January has been less like Narnia under the White Witch's spell and fairly warm. I racked up 23 books this month and 19 of those were mysteries (or at least rumored to be...I don't quite buy Fadeaway Girl by Grimes as a true mystery...). If I can keep that pace up, I should get to plant a flag on top of Mount Olympus on Mars again for my Mount TBR Challenge. Fingers crossed. So much for quantity. How about quality? The books were a mixed bag...several one-star showings and all of the five-star winners were rereads. Hope February brings in some books that will warm my reader's heart. Here are the stats:
Total Books Read: 23
Total Pages: 5,856
Average Rating: 3.46 stars
Top Rating: 5 stars
Percentage by Female Authors: 61%
Percentage by Male Authors: 30%
Percentage by both Female & Male Authors: 9%
Percentage by US Authors: 52%
Percentage by non-US/non-British Authors:  8%
Percentage Mystery: 83%
Percentage Fiction: 97%
Percentage written 2000+: 26%
Percentage of Rereads: 35%
Percentage Read for Challenges: 100% {It's easy to have every book count for a challenge when you sign up for as many as I do.}
Number of Challenges fulfilled so far: 2 (6%)
Mysteries Read
The Green Island Mystery by Betsy Allen (3.75 stars)
The Case of the Famished Parson by George Bellairs (4 stars)
And Then There Were None by Agatha Christie (5 stars)
Easy to Kill by Agatha Christie (4 stars)
Hercule Poirot's Christmas by Agatha Christie (4 stars)
Witness for the Prosecution by Agatha Christie (4 stars)
The Ruby Raven by Michael Dahl (3.5 stars)
An Old Betrayal by Charles Finch (3 stars)
Best "Thinking Machine" Detective Stories by Jacques Futrelle (3 stars)
What, Me, Mr. Mosley? by John Greenwood (1 star)
Fadeaway Girl by Martha Grimes (1 star)
Death Comes to Pemberley by P. D. James (1 star)
And Soon I'll Come to Kill You by Susan Kelly (2 stars)
Overture to Death by Ngaio Marsh (4 stars)
Bodies from the Library by Tony Medawar [ed] (3.75 stars)
Cut to the Quick by Kate Ross (4 stars)
Whose Body? by Dorothy L. Sayers (5 stars)
Eight Perfect Murders by Peter Swanson (3.5 stars)
Deathblow Hill by Phoebe Atwood Taylor (3.5 stars) 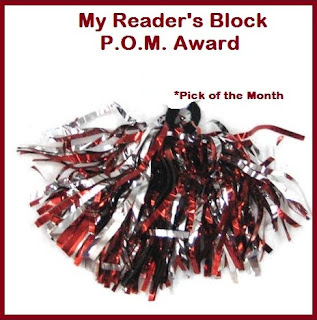 Now it's time to get down to cases. All of the Christie, Marsh, and Sayers rereads are out. I have read them very recently (and reviewed most of them on the blog twice) and I believe some of them have won before, anyway. That cuts out all of the five-star winners and over half of the books that grabbed up four stars, leaving us with two four-star contenders: The Case of the Famish Parson by George Bellairs and Cut to the Quick by Kate Ross. There was much to love about the Bellairs book--from the rural coastal setting to the vintage mystery plotting to my favorite supporting character, Harry Keast. Keast makes up long words because he doesn't know enough real ones and his speech is delightful. The Ross book is the first in a series of four Regency-era historical mysteries starring Julian Kestrel--dandy and man about town. I read her books back in the mists of time, before blogging and before I really kept good notes. All I have is star ratings that tell me I really enjoyed them, so I thought it time to revisit the stories and see if they held up. Well...Kestrel's debut does. Ross gives us a very humane detective hidden beneath the dandy's finery. He is sharp and intelligent...and just human enough to make realistic mistakes on his way to the solution. A fine historical mystery and...therefore...the winner of the first P.O.M. Award of 2022 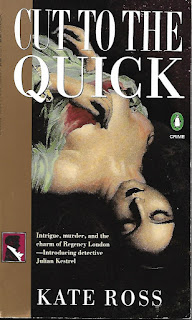