The Case of the Famished Parson 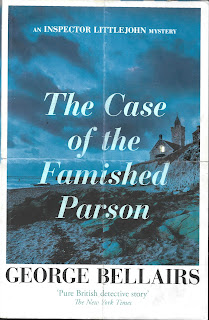 The Case of the Famished Parson (1949) by George Bellairs

The Bishop of Greyle, James Macintosh, is bashed over the head and his body dumped over a cliff edge into Bolter's Hole, a convenient little place along the coast at Cape Mervin. But, unfortunately for the murderer, the body isn't washed out to sea. The bishop gets lodged between some rocks and is found relatively quickly by Harry Keast when he goes out early in the morning looking for golf balls hit just a little too hard off the green near the cliffs. Allain, the proprietor of the Cape Mervin Hotel, calls upon his illustrious guest from Scotland Yard, Inspector Thomas Littlejohn, to make a busman's holiday and lend a hand with the investigation. He hopes that the matter will be cleared up with little fuss and less publicity.

But odd things begin to complicate the case and it doesn't look like a solution will come quickly. There's the matter of emaciated state of Macintosh's body. And the millionaire's shoes that went for a walk that night--without the millionaire. There's the mysterious phone call that lured the bishop from the hotel after 11 pm. And the bishop's loony family. And the fact that somebody takes a potshot at Littlejohn when he visits said loony family, hitting him in the thigh and laying him up for several days. There's also the curious lights in the harbor and the fact that nobody seems to have seen anything that night--not even the night watchman in the little shed near the hotel. But when a second murder follows closely on the first it becomes clear that at least one person knew something...unfortunately, he's now dead as well. Littlejohn, his right-hand man Sergeant Cromwell, and the local inspector have their hands full sifting alibis and deciding whether the motive for murder lies with the bishop's family or in something he discovered while on holiday in Cape Mervin. But what could an inoffensive bishop with a interest in psychology and Eastern religions have found out in the short time he was at the hotel?

This was a much more satisfying read than my previous book. And I have to say that I positively adore Harry Keast who makes up long words because he doesn't know enough real ones (example in quote below). He's a quite lovable, quirky character that we see too little of. I also really enjoy Bellairs's writing--it's clear and concise and move things along nicely without missing out on any of the fun of language. I could tell he was having a good time with vocabulary in this one (both Harry's made-up vocabulary and honest-to-goodness words).

After the shooting incident, Littlejohn spends several days conducting the investigation from bed, reminding me of The Daughter of Time and The Wench Is Dead--though investigating a current crime instead of a historical mystery. I enjoyed watching his impatience at not being able to get out and investigate...but he was able to pick up some nifty clues while watching out his window.

The one thing that keeps this from being a five-star book, was the plot. It becomes obvious pretty quickly what's going on and I was a little let down by the motive for the murder. The only real question is who ultimately did the killing--there are several for whom the motive could be valid (I can't say more without giving things away). And perhaps that is the point of a murder mystery, finding out "whodunit," but it would have been more satisfying with a different motive. Still...this is an excellent read from Bellairs and I quite enjoyed myself this evening. ★★★★

Harry...had little to no formal education, but experience and shrewdness made up for a lot. He was fond of long words, but knew hardly any. So he made them up as he went along for the sheer pleasure of mouthing them. "Brognostication is the thief of time," he said to himself by way of excusing his early appearance on the links. (pp. 8-9)

"You're on fire!" The vicar had put his lighted pipe in his pocket as he entered the hospital and had set fire to his handkerchief. (p. 85)

In all matters except paying and receiving cash in the ordinary course of business, Mr. Topham had to consult. He consulted the authorities in Greyle on banking, his domineering mother on affairs of the heart, three stockbrokers about his surplus income, and, in secret, Old Moore's Almanac about the future. (p. 100)

[about thrillers/mysteries] Thing that strikes me is that there's more money in imagining crimes than in actually solving them on the spot. And what makes me laugh is the number of detectives there are. All big shots at Scotland Yard. Hundreds of them. (Sergeant Cromwell, pp. 103-4)
Mulroy looked surprised a bit annoyed. It is exasperating to spend years studying a subject and mastering its terms and then find the apparently ignorant layman intuitively knows as much as you do. (p. 109)

Last lines: He passed a lot of time seated on the grass in the sun and air, reading detective stories, which are one of his favorite diversions. They appeal to his irrepressible sense of humour.