The Price of the Phoenix 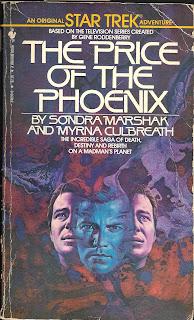 The Price of the Phoenix (1977) by Sondra Marshak & Myrna Culbreath

Captain Kirk, Mr. Spock, and The Romulan Commander (from the Classic series episode "The Enterprise Incident") take on one of the most mysterious and powerful men in the Galaxy. A man who has the strength of a Vulcan giant, the speed of a cheetah, the mind of a genius, and the pride and evil to match the Devil himself. Omne has created an outlaw planet, styled on Earth's wild west, where those who want to operate outside the Federation's "oppressive benevolence" or separate from the Romulan or Klingon empires can follow their rules--provided they agree to settle any differences via the laws of Omne's world. Disagreements to be settled by whomever can draw their gun the fastest.

But Omne has decided that he is not satisfied just operating outside the Federation...he'd like to take it apart and the best way to do that is to expose the person he considers the most flagrant breaker of the Prime Directive, Captain James T. Kirk. He invites delegates from the biggest Federation stakeholder planets as well as those from outside the Federation and plans an event to begin the dissolution of the Federation. The Romulan Commander is on hand to take what advantage she can for her Empire. But..there are wheels within wheels in this plan...and it soon becomes apparent that his ultimate goal is to own a starship captain and possibly both his first office and his old enemy.

It will take murder and the rising of an unexpected phoenix to bring Starfleet officers and The Romulan Commander into an uneasy alliance. Omne will force them to consider the cost of friendship and loyalty and pride. How much is an individual life worth? And does it make a difference whose life it is? And ultimately...are they willing to pay the price of the phoenix?

I first read this back in the early 80s. It was one of my favorites of the early Star Trek books. I loved the themes of friendship and sacrifice--watching Kirk and Spock...and even the Commander try to outdo each other in making wagers against Omne's stacked deck to try and save the others. It was an exciting adventure and a lesson in loyalty. It showed how one-time enemies could learn to work together when it counted. Rereading the book as an adult, I can see that some of the material is a bit over the top. If I were reading it for the first time, I'd probably be more critical of the fanfic nature of it. But....I know where this novel falls in the ST timeline and, so, I turned off the critic for this one.

These early novels come from a time when the fans were what was keeping Star Trek alive. The show had been sent into syndication and the studio had given up on the ST property long ago. Phoenix came out before there was the hope of the first ST feature film and most of the authors of those early Bantam ST novels were fans who simply had to have more stories about their favorite science fiction characters. Having discovered what a great show ST was about that time, I understood the need for more stories about Kirk, Spock, McCoy and company and I read the novelizations as fast as I could find them. My one real quibble with this book is that McCoy features so little.

The human concept of "friend" is most nearly duplicated in Vulcan thought by the term t'hy'la which can also mean "brother" and "lover." Spock's recollection (from which this chapter has drawn) is that it was a most difficult moment for him since he did consider Kirk to have become his brother. However because t'hy'la can be used to mean "lover," and since Kirk's and Spock's friendship was unusually close, this has led to some speculation over whether they had actually indeed become lovers. At our request, Admiral [then] Kirk supplied the following comment on this subject: "I was never aware of the 'lovers' rumor, although I have been told that Spock encountered it several times. Apparently he had always dismissed it with his characteristic lifting of his right eyebrow which usually connoted some combination of surprise, disbelief, and/or annoyance. As for myself, although I have no moral or other objection to physical love in any of its many Earthly, alien, and mixed forms, I have always found my best gratification in that creature 'woman,' Also, I would dislike being thought of as so foolish that I would select a love partner who came into sexual heat only once every seven years."

So--I'd say the creator of Kirk and Spock...and Kirk himself ought to know. As Kirk says--I have no objection to love in its many forms, but I do object to taking friendship and/or brotherhood and making it into something it's not. There can be deep affection and love without sex. Caring deeply for someone and taking care of them physically does not mean that you want to bed them. And I know that reading this novel when I was a preteen helped me form some of my thoughts, beliefs, and expectations of deep, loyal friendship. I never once thought that the two men had shared anything beyond a friendship and kinship that could withstand and outlast anything that Omne threw at it.

And...for those in the Medical Examiner Challenge, if you're wondering how a Star Trek novel figures in the mystery realm--integral to the science fiction plot is a mystery of who was really killed and how...and how many times.

A thoroughly enjoyable reread-- ★★★★★ when I first read it and I'll not argue with that rating now.

First line: Dr. McCoy had one thought in his mind: Spock must be spared this!

Spock's hand closed on Omne's wrist and learned tt was not Human when it did not break. (p. 24)

The perfect murder [redacted because spoiler] and nobody died. (p.45)

Last line: And he saw that he had done it again as the Commander and James made it out the door. [empty space contains slight spoiler--highlight if curious]

Deaths = 2 shot (that I can count--there were two more burned to death, but the authors didn't bother to give them names)