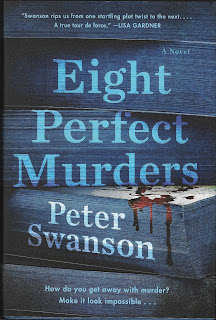 Eight Perfect Murders (2020) by Peter Swanson
From the very first line Malcolm Kershaw, used bookstore owner and former crime fiction reader, is plunged into a murderous mystery. When he first began working at Old Devils Bookshop, the owner asked him to start a blog for the store. His first blog post was called "Eight Perfect Murders" and he listed eight crime novels that fit his definition of perfect murders.
Now--five years later, deaths begin happening and Special Agent Gwen Mulvey of the FBI has come calling. She sees some similarities between the deaths and the books on Kershaw's list and she's asking him for any help he can give. It soon becomes apparent that the killer is someone who knows Kershaw and that Kershaw's past is intricately linked to the present crimes. He becomes intent on preventing further deaths without letting too many of his own skeletons out of the closet. But is that really going to be possible?
First--a warning. If you haven't read the books on Malcolm Kershaw's list (see bottom of this post), might possibly want to in the future, and don't want the plots spoiled, then you should read the books before picking up Eight Perfect Murders. I have read all of the books which might interest me, so I didn't mind having the others spoiled. But if I hadn't read the Christies, in particular, I would have been very upset with the huge spoilers Swanson drops.
Second--this is a thriller. If classic mystery fans are looking for a story in the classic detective tradition, they'll be disappointed.
That said, this was a fairly enjoyable thriller in the modern unreliable narrator (or is he?) style--at least for me. Swanson packs in the twists and turns and gave me a very nice afternoon's entertainment. I picked up on the one clue from classic crime that was most casually introduced, but I didn't take it as far as I needed to. I expected part of the ending, but not quite all and it was nice to have a bit of surprise left. I know that others (see John's non-review over at Pretty Sinister Books, for instance) didn't enjoy it as much, but I suspect I didn't find it as annoying and obvious for the simple reason that I read so few modern mysteries and haven't really indulged in many of the recent unreliable narrator novels.
I will say that it would have been a far superior book if Swanson had done a true homage to classic "perfect" crimes rather than recycling their plots (and spoiling them in the process). But it did make a change of pace from my usual fare. ★★★ and 1/2
Also reviewed by the Puzzle Doctor at In Search of the Classic Mystery Novel

First line: The front door opened, and I heard the stamp of the FBI agent's feet on the doormat.

I ran my thumb along the edge of the book, riffling the pages, and that musty, prickly smell of an old paperback reached my nostrils. I've always loved that smell, even though the book collector side of me knew that it was a sign of a book that had been improperly maintained over the years.... (p. 35)

Books are time travel. True readers all know this. But books don't just take you back to the time in which they were written; they can take you back to a different version of yourself. .(pp. 37-38)

Last line: It's nice to think I'll leave a mystery in my wake.

Deaths = 16 (five shot; one beaten to death; one hit on head; one cancer; one heart attack; one fell from height; one car accident; one house fire; one strangled; two poisoned; one hit & run) [This includes deaths from the books mentioned within the story where victim and method are named.]

The A.B.C. Murders by Agatha Christie; The Red House Mystery by A. A. Milne; Malice Aforethought by Francis Iles (Anthony Berkeley Cox); Double Indemnity by James M. Cain; Strangers on a Train by Patricia Highsmith; The Drowner by John D. MacDonald; Deathtrap by Ira Levine; and The Secret History by Donna Tartt. Also spoiled in a big way: The Murder of Roger Ackroyd by Christie