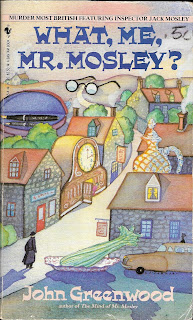 When old Mr. Henry Burgess dies a nice natural death, the residents of Bagshaw Broome never expected anything shocking to happen as a result. But bits and pieces of his household items show up in Dickie Holgate's junk...er...antique stall and Inspector Mosley takes a quick interest. Because, you see, some of those items are actually stolen goods from a string of robberies that have taken place in the surrounding towns. Tracking the stolen items as well as the thieves involve Mosley and Sergeant Beamish in an impromptu kidnapping where the kidnappee aids and abets her kidnappers.

The tagline on the book says "Murder Most British Featuring Inspector Jack Mosley." Except it's not--murder, that is. Sure, it's British. And it features Inspector Mosley. But there's not a murder in sight. There's not even decent mayhem. Mediocre theft and kidnapping with a bit of breaking & entering and squatting in other people's houses going on. Inspector Mosley has got to be the most irritating police inspector I have ever encountered and John Buxton Hilton (disguised as John Greenwood) has apparently forgotten what a good plot looks like. A great deal of the time, it reads like he left out half of what was going on in each scene. It's very difficult to follow Mosley's investigation--and, really, I just assume that there was one, since Mosley is a detective inspector, after all. I began this review intending to hand out two stars...but I've decided that was way too generous. So, ★ it is. Publisher's Weekly ended their review by saying this was a "funny, intricate and wholly enjoyable story." My edition seems to have left out the funny, intricate, and enjoyable parts.

First line: Bagshawe Broome: an 1860s town hall whose solid neogothic furbelows proclaim the venerability of the borough fathers of the day.