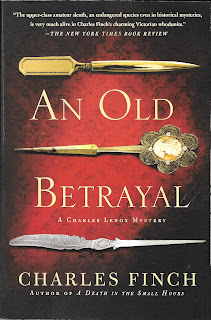 Charles Lenox's detective protégé, Lord John Dallington, is very sick and asks Lenox to meet a client at Charing Cross. The meeting goes wrong, but Lenox is so intrigued by the circumstances that he takes time from his busy schedule as a Member of Parliament to keep his hand in the case. Someone is impersonating a reclusive country squire and harassing a social secretary at Buckingham Palace. When the country squire is found murdered, Lenox and Dallington realize that something much deeper than harassment and fraud is going on. something that may threaten the Queen herself.

I enjoy Finch's Victorian-era mysteries. He has the details of the period and the inner workings of the Parliament down cold. And it is always fun to visit with all our old friends--Lenox, his wife Lady Jane, his secretary Graham, and his friend Dr. Thomas McConnell--as well as Lord John Dallington. In general, the mystery plot was a good one with an interesting motive behind the killings and attempted killings. My only quibble is with the anti-climatic ending. We catch the culprit/s about ten chapters from the end, the prisoner/s won't say a word about anything, and Dallington has to go rooting about in the countryside to find the motive. And even then he doesn't find the whole story. It just felt a bit flat after the huge action scene when Lenox, Dallington, and Inspector Jenkins catch the criminal/s in the act. A solid mystery and I was pleased to see the turning that Lenox's career is taking at the end of the book. ★★★

First line: The long green benches of the House of Commons were half-deserted as the evening session began, scattered with perhaps a few dozen men.

Last line: And what happiness to share it with someone.

Deaths = 5 (one natural; two shot; one fell from height; one hanged)

Hm, should I try the Finch mysteries again? I was very disappointed with the Beautiful Blue Death one.

Well, I do think there are stronger entries in the Lenox series. It depends on what exactly disappointed you about the first one. I thought the wrap-up for the first book was lacking, but enjoyed the characters. It was obviously a first book, so it did have some difficulties.