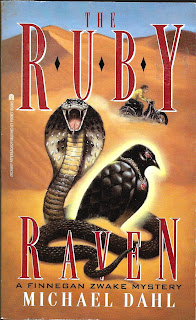 Finn (Finnegan) Zwake lives with his Uncle Stoppard because his parents (archeologists) went missing while on an expedition in Iceland. Uncle Stoppard is a well-known mystery writer. His latest book, a re-imagining of  Hamlet with Ophelia as an amateur detective has won the notice of Mr. Ravencroft, the sponsor of the coveted Ruby Raven award. He and several others are among the finalists for the prestigious prize. The Ruby Raven is better than the Edgar or the Dagger or the Shamus...it comes with a hefty million in cold, hard cash. Even the runners-up get a bit of pocket money--sharing another million equally among themselves. The only catch? The finalists must be alive and well and present at the ceremony to win. And that's not going to be as easy as it sounds.

Ravencroft lives in the middle of the Sahara desert and this year's ceremony is set to take place at his home. There is a perilous bus trip in their future...but will they even stay alive long enough to board the bus? One of their number is squashed by a pillar while on a sight-seeing trip before heading into the sand. Another has disappeared. When the remaining authors venture out on the bus trip, they're caught in a sandstorm and forced to take shelter in an old Foreign Legion prison. Will any of them make it out alive? Finn's uncle goes missing, but Finn is certain he's still among the living. They search the place up and down and in and out and can't find a trace. Finn teams up with Abou, a young reporter, to try and solve the mystery before killer eliminates all the competition.

This is a fun, fairly blood-thirsty (for a young adult story) mystery with way more literary puns than necessary--including Finn's full name. But I can forgive the punning tendency when there's a clever mystery plot to solve. I totally lost track of two clues that would have helped me with the motive behind the incidents, so kudos to Dahl for pulling the wool over my eyes. I was charmed by young Finn and now I'm tempted to go hunting for the next book in the series to see if he finds his parents. Or at least finds out what really happened to them. ★★★ & 1/2.

First line: My family has always had a fondness for dead things.

Last line: I am also convinced that Finn and I shall never forget it.

Deaths =  4 (one crushed by fallen pillar; one beheaded; one fell to his death; one shot)

This review was a pleasant surprise! I've read and reviewed two of Michael Dahl's Finnegan Zwake novel back in 2020, The Worm Tunnel and The Viking Claw, which I described as Case Closed meets Jonny Quest ('90s version). Adventure stories with detective plots. What surprised me at the time was the quality of the detective plots complete with locked room murders and impossible crimes! The Worm Tunnel has a really good locked tent mystery with an original solution. Highly recommended.

"...I'm tempted to go hunting for the next book in the series to see if he finds his parents."

I'm sorry to be the bearer of bad news, but Dahl abandoned the series in 2002 and left the main storyline unresolved.

Thank you for reminding me to return to Finn and his uncle!

Hi, TomCat! Glad to know that you recommend The Worm Tunnel. I'll have to keep eye out for other titles in the series. But I'm sad to hear that Dahl never resolved the parents storyline.