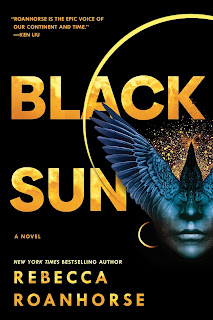 An epic fantasy novel inspired by various pre-Colombian cultures in the Americas. Readers follow the path of Serapio, a young Crow whose destiny is to become the Crow God who will wreak vengeance upon the priest clans who destroyed Crow ancestors. Serapio's mother prepares him for his quest to become the Odo Sedoh. He will become blind, learn to talk to the crows, and be trained in power and battle skills that will allow him to defeat his enemies. When the time comes, he will rely on Xiala to take him back to Tova, the holy city where the Sun Priest--and the other priests are on the verge of celebrating another year under the power of the Sun God. Xiala is a ship's captain whose power of Song has the ability to conquer enemies as well as calm the stormy seas and who has the ability to get him to Tova and the Sun Rock in time to fulfill prophecy.

Waiting on the side of the priests is Naranpa, the current Sun Priest. Naranpa is a scholar priest who faces treachery among the priesthood. She has tried to bring change to the ruling class...making it more compassionate and involved with its subjects rather than standing aloof. But few of her fellow priests share her vision and there is danger all around. Her friend, the Priest of Knives (I read it as Master of the Guards), does his best to protect her, but will saving her from the priesthood simply keep her intact for the clash with the Crow God reborn?

Roanhorse does a beautiful job building the fantasy-world of what might-have-been in the pre-Colombian days of the Western hemisphere. We have a solid understanding of how this world works--the hierarchies within clans, the means of travel, the magic and powers that certain members of society possess. It's all given to us casually, but we soon become immersed in the world and it seems perfectly natural for this person to see the world through the eyes of crows and for this one to ride upon the backs of birds and that one to calm the sea with her song. She also creates interesting characters that we want to follow to the end (the real end for some of them, unfortunately). My favorite was Xiala. I really, really like our mermaid-like captain and hope very much that she appears in future books.

A smashing, epic adventure that I could not put down until it was finished. ★★★★ and 1/2.

First line: Today he would become a god.

Life is a series of false hopes. We all have misplaced hopes until we learn better. (Paadeh; p.86)

Last lines: "If you can hear me, hold on. We're going home."