The Witness for the Prosecution & Other Stories 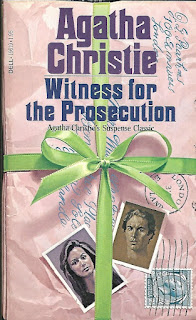 The Witness for the Prosecution & Other Stories (1948) by Agatha Christie

A good, solid collection of short stories by Agatha Christie. I have read nearly all of these in the last two years (in two separate collections) and enjoyed them then as well as now. The only one that wasn't include in either The Hound of Death or The Listerdale Mystery collections was "The Second Gong"--which is also the only story to feature Hercule Poirot. Christie provides good entertainment in short form just as she does in novel-length stories. ★★★★

"Witness for the Prosecution": The original short story behind the play and, later, movies. Leonard Vole has been accused of the murder of Miss French, a wealthy elderly woman who took a fancy to him and who has left him as her heir. Vole is sure that his wife can provide him with an alibi--but she has a nasty surprise for him and his Counsel when she appears as the witness for the prosecution.

"The Red Signal": A dinner party conversation turns to a discussion of premonitions and one young man, Dermot West, states that the "red signal" (a feeling when things aren't right) has never failed him. They then sit down for a seance with a medium who issues a warning to one of the group not to go home because there is danger there. It felt like she was talking to West and he goes home to find himself wanted for the murder of his uncle. It certainly does seem that the reference was to him...but then someone else comes along...

"The Fourth Man": Three men in a railway carriage (a Canon, a lawyer, and a doctor of conditions of the mind) fall into a conversation about split/multiple personalities. A recent case involving a young woman who seemed to have at least three and perhaps four personalities is most intriguing to them. As she originally was, Felicie was an uneducated girl--apparently not strong intellectually and without musical talent. She suddenly began to speak foreign languages with ease and could sing an play the piano. While the men are talking, the fourth man, who seemed to be asleep, tells them he knows the case personally and gives them a tale much stranger than a simple case of split personality.

"S.O.S.": Mortimer Cleveland has the worst luck with his car. Nasty, rainy weather to drive in and then he has not one...but two flat tires. He knocks on the door of the only house in sight and encounter a strange family living in a very tense atmosphere. When the two daughters show him to his room for the night he realizes that one of them has written "SOS" in the dust on the nightstand. Which of them? And what do they fear?

"Wireless": Mary Harter is an elderly lady with a weak heart--but her doctor tells her if she takes it easy and avoids shocks then she will still have many more years left. Her nephew persuades her that a radio would be just the thing to help her pass the time at home...and then the radio begins transmitting some very startling messages...

"The Mystery of the Blue Jar": Jack Hartington is a healthy, apparently sane young man who begins hearing cries of "Murder. Help. Murder!" which no one else can hear. There seems to be a ghost involved...a ghost with great interest in a particular blue jar.

"Sing a Song of Sixpence": While on a sea voyage, Sir Edward Palliser made a promise to a young woman that if she ever needed help then she could come to him. He's rather surprised when several years later, she does. Someone has murdered her great-aunt and she wants to him to find out who did it. So he does.

"Mr. Eastwood's Adventure": Mr. Eastwood is a mystery writer in need of a plot. He's got a perfectly good title ("The Mystery of the Second Cucumber"), but that's all he's got. He's got no mystery. Well...that is until he receives a mysterious phone call asking him to come to the aid of a young woman and the code word is...cucumber.

"Philomel Cottage": Alix Martin marries a man after a very brief acquaintance. After a few odd conversations, she begins to suspect her husband of harboring secrets from her. Possibly very deadly secrets.

"Accident": Retired Inspector Evans is sure that he recognizes a woman in the village as one who was acquitted of poisoning her previous husband. He's pretty sure she was guilty and that's she's planning on polishing off husband number two as well. While he's still debating what to do about it, he visits a fortune teller at the local fete who tells him to be very careful. He is about to make a decision that could be life or death...and if he makes a mistake there will be a death. This is one fortune teller who earns her pay...

"The Second Gong": Hubert Lytcham Roche is found shot in a locked room with sealed windows. It might be taken for suicide...except he had written to Hercule Poirot and expressly asked him to come down to Lytcham Close to investigate a little matter of a family swindle.

First line (1st story): Mr. Mayherne adjusted his pince-nez and cleared his throat with a little dry-as-dust cough that was wholly typical of him.