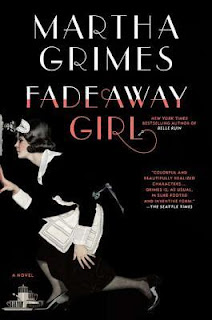 Emma Graham lives in what she calls "Tragedy Town." Over the years there have been three connected murders--a shooting, a stabbing, and a drowning--and an alleged kidnapping. And Emma herself was nearly drowned as well. As a result of that incident, she's been made a cub reporter on the local newspaper and she's supposed to be writing up her version of the events but she can't get her mind off the old murders and the kidnapping. She firmly believes that all the troubles in Spirit Lake, La Porte, and Lake Noir are connected and that the tragedy isn't over yet. When a stranger by the name of "Rafe" Diggs shows up and more tragic events occur, she's proved right. But just how does everything tie together?

You'd think I would have learned my lesson about Martha Grimes and her books set in the United States instead of England. When I first started reading Grimes (back in the 80s), I worked my way through her Richard Jury series. Then, all unsuspecting, I picked up The End of the Pier when it came out. Kirkus Reviews begins their review of that one with "Something completely different from the author of the popular, ever-so-British Inspector Jury mysteries...." They weren't kidding. It was completely different and completely not my cup of tea. And neither is this one--set in the same area and featuring some of the same families. Martha Grimes may be American, but I'd much rather read her British mysteries any day of the week and twice on Sunday.

The twelve year old protagonist does absolutely nothing for me. She has the most wild flights of fancy intertwined with her "deductions" and we're expected to believe that she solves these old murders and the mysteries behind the kidnapping when the police were unable to do so. Sure, there's a long history of girl detectives (Nancy Drew, Trixie Belden, Beverly Gray...etc) doing what the police couldn't, but Emma Graham isn't even believable from a fictional standpoint. I couldn't suspend my belief that much... ★

First line: We were talking about the kidnapped baby.

In other words, it was nothing like the song, but then, I guess things seldom are. (p. 9)

Last lines: I wondered if the trees stood there at the edge of the dark, guarding a great mystery. Or was all of this just my righteous imagination?

OH, this book went right from my TBR pile to being posted on PaperbackSwap! I will stick with the Richard Jury series.