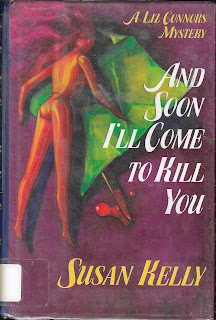 Liz Connors writes articles about true crime and short fiction pieces as a free lance. Over the years, her work has annoyed a number of people and she's regularly gotten anonymous mail from those who have a bone to pick with her--for one reason or another. But she's never been seriously alarmed. Until now. Previous letters were one-offs--someone getting their grievances off their chest and moving on with their life. This time the letters keep coming and the tone becomes more menacing with the latest one ending: And soon I'll come to kill you.

Liz's boyfriend, Lieutenant Jack Lingemann of the Cambridge Police Department, insists that she take it seriously and that she move in with him while they try to figure out who might be sending these letters. They come up with a short list of people who might be vindictive and disturbed enough to take revenge--from the leader of a vicious street gang to a repressed computer geek who was arrested for computer fraud to an ex-boyfriend with ego issues to an eye doctor who molested elderly patients to the leader of a cult-like religious sect. When others connected to one of the suspects begin receiving threatening notes and then some of them are found dead, Jack becomes convinced that he's Liz's tormentor as well. But is that the case? And, if so, will the police nab him in time?

Spoilers Ahead! Read at your own risk.

I found this entry in the Liz Connors series (#5, in fact) to be much weaker than the debut novel, The Gemini Man. When I read that one several years ago I felt there was a weakness in plotting--the red herrings and false clues weren't strong enough to mislead readers, but I did like the characters and thought there was great promise in the writing. I still like Liz and Jack. They are a great couple and work together well. The writing from Liz's point of view is excellent. I just didn't care for the plot of this one at all and I especially didn't appreciate the fact that we wound up with not one, but two separate whackos threatening Liz. Seriously? This made the plot messy.

And...I honest-to-goodness could not believe that Jack would be so insistent that Liz not be left alone even after he thinks it's over and then, by golly, if he doesn't take her back to his place and leave her there all by herself, saying that Gloria (another cop) "should be here in fifteen minutes." So, of course, the real stalker is right there on the spot and kidnaps her. It would have worked much better if Jack had just assumed that everything was over and dropped her off thinking it was all okay. That would make sense and we'd still get the final twist ending where it really wasn't all over. But the man was still checking all the rooms, still walking around the premises, still thought somebody should be with her--so why didn't he wait the fifteen measly little minutes until backup showed up? If he (obviously) still thought something could happen, why did he think those fifteen minutes were magical and nothing would happen then? Sorry for my little rant--but it bugs me. The other thing that bugs me is the real ending. After it's all over and the nutcase who's been stalking Liz has finally been caught, the book ends with a bit of a cliffhanger. Liz goes back to her apartment and sorts through her mail and finds yet another anonymous note calling her names. Like it's all going to start over again.... I like my mysteries to have a definite finale. The bad guy gets caught (or killed or whatever) and that's the end of the story. Don't leave things open-ended. ★★

First lines: The first letter arrived on October sixteenth. I read it and dismissed it.