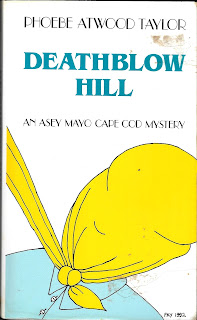 Asey Mayo is called upon to get to the bottom of odd happenings around Deathblow Hill, home of two feuding factions of the Howes family. A chain link fence topped with barbed wire divides the Howes establishment from the that of the Keiths. Suzanne Howes and her son Lance run a boarding house with the aid of their friend and maid-of-all-work, Broody Mary, and on the other side of the fence is Simon Keiths and his wife Abby. The feud all started when old Bellamy Howes died and no sign of his rumored fortune could be found. Each side of the family was convinced that the other had found it.

The feud was just a silent simmering until the odd things began to happen--two ransacked houses, mysterious prowlers sporting yellow handkerchiefs, and an attack on Suzanne Howes. A young woman named Joan House shows up as a boarder. She's the secretary to the famous tycoon Benjamin Carson and she manages to find and lose Carson's right-hand man along the way. Then--of all things, Carson shows up in the Howses' kitchen--garroted with a yellow kerchief. It looks like Carson was on the hunt for the missing Howse treasure and that someone let him in the house. Who? And did that person kill him? And just where is that missing treasure anyway?

This is a real hodge-podge mixture of a plot--it was like Taylor was trying to meld a classic mystery with a gangster plot with romantic suspense, cozy mystery, and adventure thrown in for good measure. And somehow makes it work pretty well. Underneath all the comings and goings, is a nicely plotted little mystery that readers can solve if they can just ignore the extraneous characters and side-issues. But sifting the wheat from the chaff will keep you pretty busy.

Character development is a real plus with Taylor and even the characters who don't have a lot of time to shine come through well. I did want to tell Clare Chatfield to go for a long walk off a short pier, but everyone else was interesting and integral to the plot (Clare and her marmoset were just annoying). I suppose the marmoset does play an important part...but I think Taylor could have found a way to point out certain clues without him. ★★★ and 1/2.

First line: It was the hour when Suzanne Howes most enjoyed the hill and the surrounding Cape scenery, the hour when the sun began to dip beyond Weesit Harbor and the blue rim of Cape Cod Bay, when the salt marshes took on a golden haze, and the sea gulls swooped in ever widening circles toward the ocean side and the crashing Atlantic breakers.

Last line: "It's what my nephew gets, for passing the buck just once too often."

Deaths = 5 (two strangled; one died of plague; one car/train accident; one drowned)