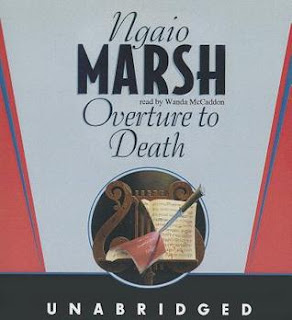 When reading the synopsis for Overture to Death (1939) by Ngaio Marsh, one can be excused for thinking that this will be another of her theatrical mysteries. After all, it tells us that a group of seven amateur actors are preparing to put on the play Shop Windows when Rachmaninoff's "Prelude in C Sharp Minor" is set for the overture. Then on opening night the pianist barely gets started--playing three chords and then stepping on soft pedal--before a loud bang is heard and Miss Idris Campanula falls dead against the sheet music. There's no performance and the play setting itself features very little in the plot other than to provide a way for Marsh to insert a rather ingenious method of murder. I'm quite sure I'd never come across a deadly piano before I read this one the first time (long ago and far way from my hometown Carnegie Library).

The stars of Marsh's show are Miss Campanula and her bosom friend Miss Eleanor Prentice, two embittered old maids who like nothing more than to spread dreadful rumors about their neighbors and then confess their sins to the handsome rector. Of course, the dear friends are also rivals for the rector's regard--each woman imagining herself to be the front-runner in the "rector's wife" stakes.  When Inspector Roderick Alleyn arrives on the scene to decide who gave Miss Campanula such a dramatic death scene, he finds that he must first discover if the murderer has cast the right woman as victim. For until about twenty minutes or so before curtain time, everyone assumed that Miss Prentice would be playing her standard piece as the opening. She is prevented from doing so by an infected finger and only agrees to give up her martyr's determination to play no matter how much it hurt after the rector convinces her. There seems to have been no time for the gun to have been rigged up in the piano after the change in pianists took place--so was Miss Prentice the intended victim? And what was the motive? Do people really kill just because someone is a meddling, gossipy busybody?

This was an enjoyable entry in the Alleyn case files. A cast of interesting characters from repressed village spinsters and the handsome cleric to the county squire and the young lovers (whose parents are forbidding the match) to the doctor and his adulterous love interest, the attractive widow; a clever murder method; a heaping helping of red herrings (some provided courtesy of the young scamp George Biggins; and plenty of humor and excellent dialogue.

Great fun even though I remembered who the culprit is--of course I did read this about four years ago. This time I listened to an audio version read by Wanda McCaddon. She does a very nice job giving voice and unique personality to each of the characters  and increased the rating for this reading from 3.5 stars (previous) to a full ★★★★.

This is a good one! I'm not very good at remembering who did it in mystery novels. I read Overture to Death (again) several months ago and have already forgotten who it was.