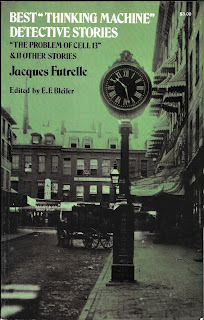 These are supposed to be the best of Futrelle's detective stories about Professor Van Dusen. There are, in fact, a few really good ones here--"The Crystal Gazer," "The Brown Coat," and "The Problem of the Stolen Rubens" all qualify. There are actual clues that a reader might pick up on. There are actual clues that you believe Van Dusen picked up on. "His Perfect Alibi" comes close--the reader who actually "sees" what Van Dusen says happened should be able to figure it out. However, Van Dusen has no real evidence that such a thing happened. But since he says it must have happened, it did. And the culprit conveniently admits it as soon as Van Dusen proposes the solution. All he had to do was tell Van Dusen he was mistaken and stick to his story and there would have been no way to prove it. In this and several of these stories, Professor Van Dusen does not strike me as thinking things out logically--it is more like he guesses and those guesses naturally wind up being the solution--and the culprits all are so astounded that they confess. For instance, in one story, he reasons that a French servant naturally knows a French woman in the same building. And, of course, he loves her. And, of course since he loves her, they are really working together in an evil plot. And--of course, they were.

Given that much is made of the lost talent when Futrelle perished in the Titanic disaster, I had hoped for much a much stronger selection in a collection of the "best" stories. They are all interesting and give a nice picture of America in the early 20th Century, but I'm not sold on their overall brilliance. ★★★

"The Problem of Cell 13":  Futrelle's most famous story. Professor Van Dusen insists that nothing is impossible to a thinking man. His friends wager that he can't think his way out of a prison cell...but he proceeds to do just that.

"The Crystal Gazer": A man apparently sees his own death forecast in a crystal ball. How was the image projected if it isn't truly psychic powers? And if it's really a prediction of the future can the professor change fate?

"The Scarlet Thread": Attempts are made on the life of Weldon Henley--using the gas in his apartment. The solution all hangs upon a scarlet thread found on a flagpole.

"The Flaming Phantom": Could the Weston family's passion for mirrors hold the explanation of the "haunting" of their old homestead? And what about the 50 year-old murder and the missing jewels?

"The Problem of the Stolen Rubens": Proving that the simplest way to steal something is to carry it out under the nose of its owner.

"The Missing Necklace": Van Dusen helps Scotland Yard discover where a stolen necklace of pearls has been sent in America.

"The Phantom Motor": A speeding car disappears on a road bordered by a stone wall on one side and a stone fence on the other. And the scientist uses a bicyclist to track the phantom motor.

"The Brown Coat": A bank robber manages to hide his takings (a little over $100,000) before the police catch up to him. He swears that the cops will never find it...they don't. But Professor Van Dusen does. [Just a side-note: I don't think he owes Detective Mallory a hat. The policeman didn't find the money's hiding place and wouldn't have without the professor's help.]

"His Perfect Alibi": A man is found stabbed to death, but apparently had time to write his killer's name before he died. The only problem? The named man has a perfect alibi.

"The Lost Radium": How did the radium get out of the laboratory? Only one door and the scientist in charge was right outside it when it disappeared.

"Kidnapped Baby Blake, Millionaire": The mystery of the toddler who walked into the snow and simply disappeared.

"The Fatal Cipher": Pomeroy Stockton is a wealthy inventor, looking to re-discover an ancient (long-since lost) method of hardening copper. When he is found dead in his laboratory with an odd letter, his step-daughter suspects foul play. She asks Van Dusen to investigate and he must decide if there has been foul play or not...and, if so, who is responsible?

First line (1st story): Practically all those letters remaining in the alphabet after Augustus S. F. X. Van Dusen was named were afterward acquired by that gentleman in the course of a brilliant scientific career, and, being honorably acquired, were tack on to the other end.

Last line (last story): He opened it and a little cloud of ashes filtered through his fingers  onto the bed clothing. He sank back on his pillow, weeping.

Deaths = 4 (one poisoned; one hit on head; one stabbed; one natural)