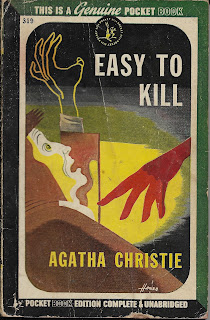 "No, no, my dear boy, that's where you're wrong. It's very easy to kill--so long as no one suspects you. And you see, the person in question is just the last person anyone would suspect." Miss Fullerton ~Easy to Kill (Murder Is Easy; 1938) by Agatha Christie

Luke Fitzwilliam has retired from the police force abroad (in Asia) and just returned to England. First thing on the train, he winds up sharing a compartment with a (so it seems to him) woolly-minded elderly lady who rather reminds him of his aunt. She confides to him that she's on important business to Scotland Yard. It seems there have been one too many "accidental" deaths in her small village of Wychwood and she believes she knows who's behind it--she insists they "get a look on their face" when they've chosen their next victim--and...she knows who's going to be next. An inoffensive doctor by the name of Humbleby. Luke is pretty sure that the Yard will just murmur interestedly and send the lady on her way.

But Miss Fullerton was wrong about who the next person to die was going to be...for she was struck down in a hit-and-run accident on her way to Scotland Yard. Fitzwilliam doesn't think of the newspaper report as more than a coincidence. But then a few days later he reads the death notice of a Dr. Humbleby from Wychford and he begins to wonder. He talks it over with his best pal, Jimmy Lorrimer who just happens to have a cousin down in Wychford. They fix it up that Fitzwilliam will be another cousin and go stay with cousin Bridget and her fiancé Lord Easterbrook and try to find out if Lavinia Fullerton was imaging evil in her backyard.

It winds up she wasn't. The longer Fitzwilliam stays in the village the more convinced he becomes that the old lady knew what she was talking about. But there's so little proof and it seems that the killer just doesn't make mistakes. He's very much afraid that there will need to be another death before he'll be able to catch the killer out...and he's even more afraid that Bridge may be next on the madman's to-do list.

I don't believe that I have read this one since the very first time I read it back in the 1980s. I'm not entirely sure why, because it's quite a nice little story. There are plenty of possible suspects with ties one or more (and, if we follow Luke's loose logic, likely all) of the victims. Christie does what she does so well...which is make me fasten onto one particular suspect and completely ignore the one she plainly displayed to me. I just have two quibbles with this one. First, Luke Fitzwilliam doesn't seem all that good a detective for a former policeman. Bridget figures things out much better--of course, she does have an inside track, having lived there and all. But still--his methods and deductions just don't seem very police-like. Second, we see very little of Superintendent Battle. He makes a cameo appearance at the end, but I would have liked to have had him more active in the story.

Putting aside those quibbles, this is still a highly entertaining mystery with an exciting denouement and a little romance thrown in for good measure. ★★★★

[about Lord Easterfield] He'll be all right. He's quite undereducated and completely credulous--actually believes things he reads in his own papers. (Jimmy Lorrimer; p. 12)

They say too many books are written nowadays. I say "no," always room for a good one. (Lord Easterfield; p. 15)

A lack of growth somewhere, that, I am convinced is at the root of much of the cruelty and stupid brutality in the world today. (Mr. Wake; p. 28) 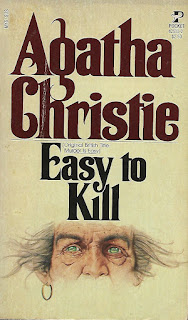 Let me tell you, the homicidal lunatic may be the most difficult thing on this earth to spot. To all seeming, he may be exactly like everyone else--a man, perhaps, who is easily frightened, who may tell you, perhaps, that he has enemies. No more than that. A quiet inoffensive fellow. (Dr. Thomas; p. 51)

This damned village--it's getting on my nerves. So smiling and peaceful, so innocent, and all the time, this crazy streak of murder running through it. (Luke Fitzwilliam to self; p. 59)

No one human being knows the full truth about another human being. Not even one's nearest and dearest. (Luke Fitzwilliam; p. 63)

Every man should have aunts. They illustrate the triumph of guesswork over logic. It is reserved for aunts to know that Mr. A is a rogue because he looks like a dishonest butler they once had. (Luke Fitzwilliam; p. 128)

Last lines: He said, "We've been close to death for a long time. Now that's over! Now we'll begin to live!"

Deaths = 6 (one run over; two poisoned; one fell from height; one drowned; one hit on head)

Great review! I haven't even heard of this one so look forward to reading it.