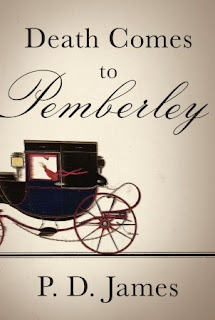 The Darcys and their household staff are preparing Pemberley for the annual Lady Anne's Ball when Lydia, Elizabeth's disgraced sister, comes careening up their drive in a coach amidst a fall storm. Shrieking and hysterical, it a few moments before they can get any sense out of her. Finally, they are given to understand that Lydia's husband Wickham and his friend Captain Denny had exited the coach near Pemberley's woods, disappeared among the trees, and then shots were fired. Lydia is convinced that Denny has murdered her husband. Darcy, Colonel Fitzwilliam, and young Mr. Alveston go off into the night to investigate.

They come back to Pemberley with a body, but it is Denny who is dead. And Wickham is nearly as hysterical as his wife. He insists that "it is all my fault" and "I killed him"--but did he really? Darcy, who holds the position of magistrate, cannot possibly investigate the matter since it took place on his land and involves his brother-in-law. Sir Selwyn Hardcastle, another local magistrate, is brought in to investigate the death. It soon becomes clear that the truth is not quite as simple as it appears.

So...this is not James at her best nor is it a particularly enthralling continuation (redo, whatever) of Austen. I thoroughly enjoyed James's Adam Dagliesh mysteries. Solidly plotted and well-done. I have also thoroughly enjoyed nearly all the Austen I have read. Delightfully witty, drawing room, books of manners. The mystery here is not solidly plotted. There are few clues that would allow the reader to deduce the solution and when the solution comes it really isn't satisfying. I was plumping for an entirely different suspect--mainly because of how much he annoyed me (and I think that's James's fault as well--I don't recall this character annoying me like this in Austen's work). And...the final chapters and the solution have the air of soap opera about them. This character seduced that one and then this character was supposed to step in and help the seduced character but they (the helper) got run over by a carriage....and so on. It really was all a bit much. ★

First Line: It was generally agreed by the female residents of Meryton that Mr. and Mrs. Bennet of Longbourn had been fortunate in their disposal in marriage of four of their fived daughters.

There are few activities so agreeable as spending a friend's money to your satisfaction and his benefit and if the buyers were periodically tempted to extravagance, they comforted themselves with the thought that  Bingley could afford it....Bingley was able to take pride in the elegant arrangement of the volumes and the gleaming leather of the bindings, and occasionally even opened a book and was seen reading it when the season or the weather was unpropitious for hunting, fishing, or shooting. (p. 10)

Gossip about the feelings of others when we cannot fully understand them, and they may not understand them themselves, can be a cause of distress. (Jane Bingley, p. 36)

...a disagreement common to marriages wherein an older husband believes that money should be used to make more of it, and a young and pretty wife is firmly of the view that it exists to be spent; how otherwise, as she frequently pointed out, would anyone know that you had it? (p. 130)

Last line: Together they got up from the bench and stood watching while Georgiana and Alveston, their happy laughter rising above the constant music of the stream, their hands still linked, came running to them across the shining grass.

Deaths = five (one shot; two hanged; one run over; one hit on head)

Yes, a bit much. Not one of James' finest moments, but the TV series was fun!

Sorry this one didn't work better for you.