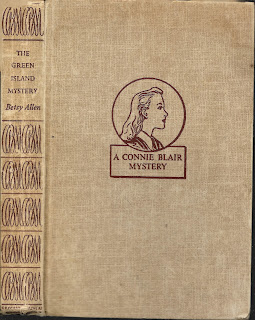 The fifth installment in the Connie Blair series finds Connie and Georgia Cameron on a business trip to Bermuda. They work for the Reid & Renshaw Advertising Agency and are on a mission to help the Tremont Shop, a long-established British firm, improve their image and their sales. Their trip takes them by ocean liner to the beautiful green island and aboard ship Connie, who attract mysteries like bees to honey, makes the acquaintance of David Scott.

David is on his way to Bermuda to settle his aunt's estate. His aunt was Penelope Sebastian, a well-known mystery author, and there is a bit of a mystery attached to her death. Aunt Penelope was just finishing her memoirs (spilling secrets left, right, and center). One half had already been sent to the publishers, but the second half has disappeared from her estate. David hopes to find the rest of the manuscript so he can honor his aunt's wish that the royalties from the memoirs' sales should go to an orphanage.

Connie is immediately intrigued and spends all her free time--after sketching scenes for Tremont ads--hunting clues with David in Horizons, the house he inherited from his aunt. Someone has broken into the house once while David was on his way from the States and then Connie is attacked and bundled into an old clothes press when she's alone and sorting through papers. Did the assailant find what they were looking for? There are clues in a bundle of check stubs as well as in a guest book listing all of Aunt Penelope's visitors over the years. A missing thermos, a scrap of an old photo, a broken record, and a partially typed page in Penelope's old typewriter provide just the evidence Connie needs to discover the location of the missing manuscript as well as the identity of her attacker.

This is a fun career girl mystery in the same vein as the Beverly Gray and Vicki Barr series. Connie is an assured young woman who can't help getting involved in mysteries wherever she goes and has a knack for getting to the bottom of them. It is good to the young men appreciating her skills and letting her take the lead in investigating. She's a hardworking artist and sleuth--but she also gets to have fun and enjoy David company as well. There's an air of gentle romance between them, but it's her no-nonsense senior partner, Georgia, who finds love with the junior Tremont. Connie will be heading back to the States and more work and adventures with the advertising agency.

As with most of these 1940s "girl detective" mysteries, the plot is not terribly intricate and there are few real suspects to be had. I spotted the villain as soon as they made their first appearance, though I didn't quite see the twist in who they really were. An enjoyable light mystery. ★★★ and 3/4 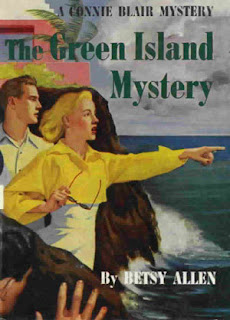 First line: Connie Blair stood at the rail of the great ocean liner and watched her mother, her dad, and her twin sister walk down the gangplank to the dock.

Last line: And from three thousand feet the entire island was green--as green as an emerald set in the sapphire sea.