Bodies from the Library 2 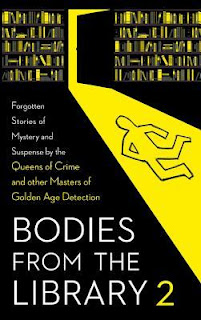 Bodies from the Library 2: Forgotten Stories of Mystery & Suspense by the Queens of Crime & Other Masters of  Golden Age Detection (2019) by Tony Medawar (ed)

It's always a delight to read anthologies with Golden Age stories that haven't been recycled in various collections before. Medawar introduces us to "lost" selections from big names like Christianna Brand, Margery Allingham, Dorothy L. Sayers, and Agatha Christie as well as names that are well-known to GAD fans, but perhaps not so well-known to casual mystery lovers. Names like John Rhode, Edmund Crispin, E. C. R. Lorac, Q. Patrick, Ethel Lina White, Clayton Rawson, and Peter Antony. Though some are a little more prominent these days thanks to reprint editions from the British Library Crime Classics and the like.

Overall, this is another solid collection--though there are three stories which are definitely not mysteries and have no whiff of mayhem. They are fine stories, but just don't seem to fit the bill. Of the bona fide mysteries, my favorites are Q. Patrick's "Exit Before Midnight," "Room to Let" by Allingham, "The Locked Room" by Sayers, Crispin's "The Hours of Darkness," and "White Cap" by White. A new Sayers is an absolute treat and each of these authors provide solid mysteries with good clues and finales. ★★★ and 3/4

"No Face" ~Christianna Brand: a psychic with his eye to the main chance insists he really does have the Gift when it comes to identifying a particularly nasty serial killer. But will his need for recognition be his undoing?

"Before & After" ~Peter Antony: Mr. Verity, an amateur dabble in detective insists that a before and after photo of the victim provides the proof needed to arrest the killer of an old lady--but does it prove what he thinks it does?

"Hotel Evidence" ~Helen Simpson: Henry Brodribb's wife decides she wants a divorce, so she talks Henry into providing evidence for a no mess court case. But he's such a nice guy, he has difficulty getting the evidence as desired. [No clue why this is in a collection of "Mystery & Suspense"--no mystery, no suspense.]

"Exit Before Midnight" ~Q. Patrick: New Year's Eve at the soon-to-be-defunct Leland & Rowley Process Company. The shareholders are taking a vote that will--if all goes as expected--result in a merger with the Pan-American Dye Company. The shareholders will be richer and few of the staff will be out of jobs. And somebody has decided that means a few people need to die. A group of seven is trapped in the upper floors of a skyscraper (no elevator, phone lines cut, and the door to the stairs jammed shut) and the murderer gets to work. Best story of the bunch so far. Very nicely plotted with lots of red herrings to keep the reader guessing.

"Room to Let" ~Margery Allingham: Rumor has it that one of the inmates escaped a deadly fire at a local insane asylum. Soon after, a mysterious Dr. Charles take a room in Mrs. Musgrave's house. When he moved in, so did fear...and, is it possible?, Jack the Ripper. There is a death...but the who and how is a surprise. From a radio play.

"A Joke's a Joke" ~Jonathan Latimer: Barnes loved to play practical jokes and no one was safe from his nasty sense of humor. But eventually he plays one too many pranks....

"The Man Who Knew" ~Agatha Christie: Derek Lawson sense danger in his flat...and danger stalking him. When it looks like he's been framed for his uncle's murder, he knows just who to suspect....

"The Almost Perfect Murder Case" ~S. S. Van Dine: Philo Vance recounts a tale of the near-perfect murder of Wilhelm Beckert which takes place in Chile. It all hinges on a neat little linguistic clue...

"The Hours of Darkness" ~Edmund Crispin:  Involves murder on Christmas Eve during a game of hide & seek during a country house party. There's also a past criminal case...are the two connected? I'm curious about one thing...if the doctor has proclaimed the death to be from strangulation, how on earth did the victim gasp out those last words to someone other than her murderer?

"Chance Is a Great Thing" ~E. C. R. Lorac: Peggy Tiler's aged aunt has a heart condition. Peggy is worried about her and doesn't want to leave her alone. But she also wants to get married. Auntie's neighbors tell her not to miss out on her big chance...they"re happy to keep an eye on Auntie. But then Auntie dies...

"The Mental Broadcast" ~Clayton Rawson: The Great Merlini and a card trick. [That's it. Really. No mystery, no mayhem.]

"White Cap" ~Ethel Lina White: There's a big shake-up going on at the Peninsular Dye Stuffs company. Miss Ratcliffe has recently taken control and is cutting out the dead wood from the staff. Tess is one who winds up on the chopping block and says a few rather unfortunate things to and about Miss Ratcliffe....and then Miss Ratcliffe winds up dead.  Tess looks like the prime suspect, but she is saved by an unexpected confirmation of her alibi. [I have to say--as soon as Tess said that she had these little blackouts when stressed, I knew that she was going to be framed. I just knew it. Also, what was up with dye companies in the Golden Age--two murderous escapades in one collection!]

"Sixpennyworth" ~John Rhode: A play that may have been written for an amateur production. Set in a pub during WWII. The pub conveniently has all sorts of sharp weapons on display and, naturally, the lights all go out and one of the customers winds up stabbed to death. He was a particularly nasty fellow, but who among the customers had sufficient reason to kill him?

"The Adventure of the Dorset Squire" ~C. A. Alington: One more non-mystery. Mild mayhem of the "lots happening, but nothing that we can really call a mystery" variety. The lights go out (another theme of the collection) and there is much blood, a flood of water from a bath tap, dog attacks, and a man in an embarrassing situation with another man's wife. Two characters think they may have murdered burglars, but they would be mistaken.

"The Locked Room" ~Dorothy L. Sayers: Oh the bliss of having a new Lord Peter Wimsey story that was actually, completely written by Dorothy L. Sayers! It could be complete drivel and I wouldn't care. It's not drivel--though I am a bit surprised at Peter's carrying on with another man's fiancee. It's played as harmless fun and they both know it's not leading anywhere...but it still seems a bit like poaching. As the title suggests--this is a locked room mystery. I got the big clue that all was not quite how it seemed but missed a couple of pointers on how it was accomplished.

First line (1st story): They sat in their silent ring in the darkened room and their touching fingers trembled and jerked apart and touched again...

"Oh lord! Not another locked room. My last locked-room case was a shattering business...all centering round some dreadful woman in a wardrobe." (Mr. Verity; in "Before & After")

Last lines (last story): "It don't pay, really," said Peter, "to be so darn clear-sighted. Have a cocktail."

Deaths = 18 (five stabbed; one fell to his death; one natural; six shot; one hanged; one strangled; one flying accident; one electrocuted; one poisoned)