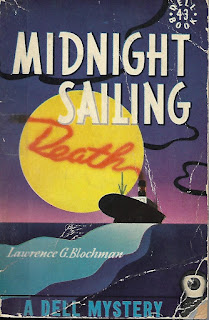 It's the late 1930s and the world is heading for another global war. Dorothy Bonner's father, a wealthy silk merchant, has apparently committed suicide after Congressional hearings accusing him of stealing top-secret blueprints from the U.S. Navy. The silk heiress has taken a powder and everyone wonders where she is and whether she was involved in her father's alleged espionage. Glen Larkin, famous foreign news correspondent, is enjoying the beginnings of a little vacation in San Francisco before heading to the Far East to cover developments there....when his bureau manager Beasley tracks him down and hustles him off to board the Japanese ship Kumo-maru headed for Japan by way of Hawaii.

It seems that Miss Bonner is aboard the ship and Beasley wants Larkin to get her story before the rest of the world finds out where she is. From the moment he steps on board, our correspondent finds himself in deep waters as he becomes involved in far more than just a hot story on a beautiful runaway heiress. There is murder on the high seas, blackmail, stolen plans, missing vanadium contracts and passports, a mysterious passenger who never leaves his compartment, and an extra "passenger" who spends his time hiding in a coffin...until he winds up really belonging there. Lurking among the passengers there is also an insurance detective who has been hired to protect the ship's very unusual cargo. Larkin's investigative reporting skills will solve the case, but he opts to let the detective take the credit while the reporter gets the girl.

This would have made a swell mystery B movie. Lots of action and misunderstandings. The plans change hands about three or four times--sometimes the person who has them doesn't know they have them. They think they have the missing contract because everything that's missing is in similar envelopes. And sometimes the person who thinks they have them really doesn't because someone else has sneaked in and taken or replaced them. It's just teeming with mysterious hi-jinks. Throw in several corpses and a few red herrings and you have the recipe for some good fun. The story is, of course, a product of its time--stereotypical representation of the Japanese crew with menacing undertones as the real world unrest in the Asian Pacific hangs over the publication date.

Blochman did manage to fool me. I should have known that one clue displayed so prominently just couldn't mean what I thought it did...but you can't win them all. A good solid mystery with just a whiff of espionage. ★★★

Why is it, darling, that death makes life so suddenly distinct and real and important? (Dorothy Bonner; p. 156)

Last line: You shameless, perfidious, unmitigated cad! I love you!

Deaths = 5 (one shot; one hit on head; one stabbed; one strangled; one drowned)