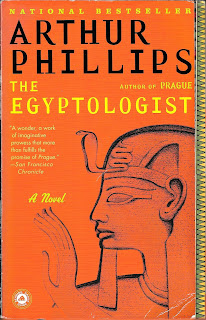 The Egyptologist (2004) by Arthur Phillips

The first storyline opens in Egypt,1922. Ralph Trilipush, Egyptologist lately of Harvard, is writing home to his betrothed, Margaret Macy. He has gone to Egypt with backing of his future father-in-law and various other investors to search for the tomb of King Atum-hadu. He has staked his professional career and a boatload of money that is not his own a scrap of papyrus which he swears is by the poet-pharaoh. His letter claims that he has found riches beyond measure and it accompanies his journals. There are dark undertones running through his correspondence and he hints that neither he nor her father (who had come to join Trilipush at the site) may make it back to Boston alive. He fears that unnamed enemies may be on their trail.

In a second storyline, we have Harold Fennell, a private detective in Australia with Tailor Enquiries Worldwide, Sydney Branch. It is the 1950s and Margaret Macy's nephew is looking for information on the family history--particularly its connection to a Mr. Trilipush. Through a series of letters Fennell tells his story of a hunt for a missing brewery king's bastard heir which led from Australia to the sands of Egypt during World War I to London and Boston...and finally back to Egypt. Fennell promises his correspondent not one double-murder, but two...but whether a solution to either is in the offing is anyone's guess.

This is an interesting, bizarre, and often-times frustrating story. It is told entirely through correspondence--primarily letters mixed with a few telegrams--and journal entries. The letters from Mr. Fennell are very interesting and tell his story well. I enjoyed watching him follow the trail of Barnabas Davies's missing heir as it slowly intertwines with the Macy family history. The letters (late in the story) from Mr. Beverly Quint and Hugo Marlowe are amusing--as well as adding their bit to the unraveling of the mystery. The letters and journal entries from Trilipush are another kettle of fish altogether. At the beginning, they give the reader background and grounding information that is helpful in working through the complexities of the mystery. But the entire middle portion ranges from deadly dull (blathering on about opening up empty portions of the pharaoh's tomb, difficulties with Egyptian workers, and trips to the bank and post office--looking for both letters from the beloved and money transfers from her papa). His journal entries toward the end take on a raving, mystical quality, but he does give us clues to what exactly has happened. And alert readers will have picked up on the solution quite some time ago.

While this story is, to a certain extent, a historical mystery--what really happened in the desert, both during the war and then again in 1922. It is also a story more concerned with identity and truth. What really makes a man who he says he is? Is it his family--traditions, family history, place in society, connections--or is it what he makes of himself and who he says he is? And, as readers, who do we trust? There are a number of unreliable narrators (through correspondence) in this story. Who should we as readers believe? And should we believe everything they tell us or just part. If we decide to take it in parts, then how do we decide which parts are true?

I've had a difficult time decidinf on the rating for this one. The parts that are good are very good. The background is interesting as are the portions with Fennell, Quint, and Marlowe. But our main character, Trilipush, is really not engaging at all and most of his part of the story is deadly dull (or just plain bizarre). So... ★★ and a half. It just doesn't quite make the three-star (enjoyable read--no real complaints) level.

Last line: His mysteries and riddles remain unsolvable for millennia stacked upon millennia until another should find him, embrace him, twist and fuse with him, vanish into him, and win, for  discoverer and king alike, the eternal love due an immortal name. [the rest redacted because it would be a spoiler]

Deaths = 4 ( two accident; one hit on head; one poisoned)

Great review,your honesty is very helpful! I won't actively search this one out but if I ever see it I may pick it up!