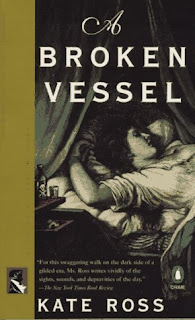 Regency dandy Julian Kestrel is brought into a second mystery--this time by the sister of his valet, Thomas "Dipper" Stokes. Sally Stokes is a girl on the game, has been ever since their parents died and she and Dipper got separated. Dipper (his name from his pickpocketing ways) was rescued from a life of thieving when he lifted Kestrel's "ticker" and rather than prosecute the lad for taking his watch the gentry-cove decided to hire him as a servant.

When Sally has a busy night with three gents she names "Blinkers," "Bristles," and "Blue Eyes," she does what she always does--lifts a handkerchief as a bit of remembrance (the money the hankies bring in is even better for remembering...). Blinkers turns out to be a bit rough and leaves Sally bruised and battered after their encounter. Fortunately, she runs into her brother when she's back out on the street and he takes her home so he can have a doctor check her over. He doesn't expect his master to be at home, but Julian surprises them both and takes an interest in Sally's welfare. He also returns her property to her...the hankies and the money she had stored in her petticoat pocket had managed to fall out. But when he also hands her a letter found among the handkerchiefs, she claims no knowledge of it. It must have been caught up in the hankie when she lifted it.

But which one? That becomes an important question because when the letter is read it's obvious that there's an urgent mystery to be solved. The letter is unsigned but clearly the woman who wrote it is in great distress. Sally tells Julian everything she can remember about the three men and he soon identifies one of them. Other clues lead him to the Rev. Gideon Harcourt's Reclamation Society--a "shelter" for fallen women. Sally volunteers to go undercover as a fallen woman looking to be saved, but they are too late. The author of the letter is found dead the very morning Sally presents herself to be reclaimed. What was to be a rescue mission is now a murder inquiry, but there are other mysteries surrounding the three men and the Society and Julian will need to sift the clues carefully to find killer.

I first read the Kate Ross books back in the 90s when they first came out and enjoyed them thoroughly. It has been very nice to revisit these books to see if they still stand up after about thirty years. And they do. The research is impeccable and Ross uses the lingo of the Regency period with ease. She also uses the phrases in such a way that the reader can easily determine what is meant from context and can be very comfortable with the language.

This outing gave us a fiercely independent young woman in Sally who helps the investigation in very definite ways that neither Julian nor Dipper could accomplish. She makes an excellent addition to the team of detectives and it isn't just Julian and Dipper who are sad to see her go at the end of the story. But she's used to being on her own and doing as she pleases and it's obvious she can't be tied down in one place for long.

The mystery itself is interesting and complex with a couple of side issues to muddy the waters nicely. One has to figure out which of the threads lead to the main issue (the woman who wrote the letter and later died) and which don't. Nicely done. ★★★★

First line: The man trudged along the pavement with his hands clasped behind him and his eyes on the ground.

There's no second-guessing what's past, or knowing what might have made a difference. It's arrogant, it's a waste of time, and there's an end to it. (Dr. MacGregor; p. 84)

He's doing evil in the cause of good, which is one of life's most exquisite pleasures. One has all the enjoyment of getting up to mischief, and none of the guilt. (Julian Kestrel; p. 196)

Last line: "But now she knows where to find us, she'll be back--Newgate seize me if she won't!"