February Pick of the Month 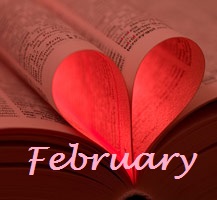 Well, so far I'm holding steady in my reading pace. I came up just shy of January's total with 22 books this month and all but one of those were mysteries. If I can keep that twenty-something pace up, I should get to plant a flag on top of Mount Olympus on Mars again for my Mount TBR Challenge. Fingers crossed. Of course, keeping the quantity high, is quality suffering? It did a bit in January. February saw no DNF or one-star books, so that was an improvement. That said, the books were still a mixed bag...several two-star showings and no five-star winners at all. Still looking for a knock-out read.... Here are the February stats:
Total Books Read: 22
Total Pages: 5,217
Average Rating: 3.23 stars
Top Rating: 4 stars
Percentage by Female Authors: 36%
Percentage by Male Authors: 59%
Percentage by both Female & Male Authors: 5%
Percentage by US Authors: 59%
Percentage by non-US/non-British Authors:  5%
Percentage Mystery: 95%
Percentage Fiction: 95%
Percentage written 2000+: 14%
Percentage of Rereads: 32%
Percentage Read for Challenges: 100% {It's easy to have every book count for a challenge when you sign up for as many as I do.}
Number of Challenges fulfilled so far: 7 (22%)
Mysteries Read
The Murder Game by Steve Allen (3.5 stars)
Murder Begins at Home by Delano Ames (3 stars)
Death Stops the Frolic by George Bellairs (2 stars)
He'd Rather Be Dead by George Bellairs (3 stars)
Surfeit of Suspects by Georgee Bellairs (3 stars)
Midnight Sailing by Lawrence G. Blochman (3 stars)
Death Walks in Marble Halls by Lawrence G. Blochman (4 stars)
This Club Frowns on Murder by Albert Borowitz (2 stars)
Murder at the Spring Ball by Benedict Brown (3.5 stars)
Sad Cypress by Agatha Christie (3.5 stars)
The Golden Box by Frances Crane (3 stars)
Portrait of a Dead Heiress by Thomas B. Dewey (2 stars)
Midsummer Nightmare by Christopher Hale (4 stars)
The Murderer Who Wanted More by Baynard Kendrick (3 stars)
The Dishonest Murderer by Frances & Richard Lockridge (3.5 star)
Clutch of Constables by Ngaio Marsh (3 stars)
The Egyptologist by Arthur Phillips (2.5 stars)
A Broken Vessel by Kate Ross (4 stars)
Clouds of Witness by Dorothy L. Sayers (4 stars)
The Five Red Herrings by Dorothy L. Sayers (3.5 stars)
Murder Must Advertise by Dorothy L. Sayers (4 stars) 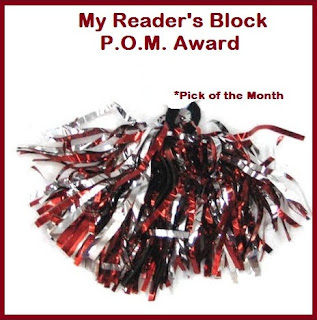 And now for our Pick of the Month Award for mysteries. Sayers, much as I love Lord Peter Wimsey, is out. Those were all rereads--and very recent rereads at that. And Sayers has won in the past. Kate Ross just grabbed the P.O.M. Award in January for her slightly stronger debut book, Cut to the Quick. The two remaining four-star selections are Death Walks in Marble Halls by Lawrence G. Blochman and Midsummer Nightmare by Christopher Hale (Frances M. R. Stevens). This really is a difficult choice because both of these are delightful.
The Blochman is a novella-length story put out in a ten cent bound edition by Dell (of Mapback fame). It has a tight plot with good clueing and interesting peripheral characters packed into 64 pages. And Blochman does a great job of describing the NYC library with enough detail to figure out where who was when. Hale's Nightmare is set in a fictional area just outside of Grand Rapids, Michigan, an area very familiar to me as my maternal grandmother lived in a small town north of there. She gives us interesting characters and manages to introduce a double romance story line that well-done and does not overshadow the mystery. The plotting is so well done that I'm on the hunt for more Lt. French novels. And I think perhaps that is the tipping point...I ended my review by saying that Midsummer Nightmare had added Christopher Hale to the list of authors whose books must be found. So, the winner of the February P.O.M. Award is.... 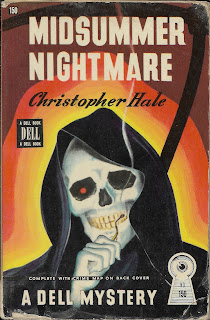 Last year I read a review of Christopher Hale's book, sadly I cannot remember which one. It was so laudatory that my husband hunted for the rest of his books. I really enjoyed each one. You have a lot of good reading ahead of you.
Chris