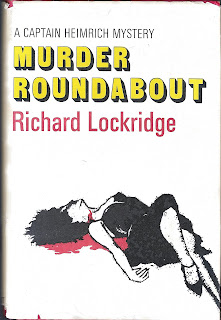 The lovely Annette Weaver (née LeBaron, film star) had thrown a picnic on the Fourth of July. A lovely picnic...at least up until the point where she decided to tell all the residents of Van Brunt exactly what she thought of them. Over a loudspeaker. And now the lovely Annette was lovely no more. Shot through the neck, she's found dead in her own hallway--first the night before by a new real estate agent named Leslie Brennan, who is supposed to be showing the house to a prospective buyer (who doesn't show) and who doesn't report it, and then the next morning by Mrs. Weaver's cleaning lady, Harriet Larkin, who does.

Leslie receives a phone call from a Mr. J. K. Knight asking to be shown the Weaver house--which is up for sale. She arrives at the house at the designated time, but no one shows up. She decided to go in the house anyway to see if a message was left and is horrified to find Annette Weaver sprawled in a pool of blood. She is just about to call the police when she hears the roar of a familiar engine and rushes out in a panic to try and catch up with the car. She never does call the police and when questioned the next day (as one of several real estate agents who might have been there) doesn't reveal her adventures of the previous night.

Inspector Heimrich and Sergeant Forniss work their way through clues--among them the noisy sports car, the mysterious J. K. Knight who doesn't seem to exist, the many men (not her husband) that Annette had been seen wining and dining with, a missing realtor's house key, and Annette's distinctive voice--to weed out the red herrings. But not before the murderer makes one more, less fatal, attack.

One of the limitations of the Lockridge books is that occasionally there are few suspects to be had. In this particular outing, there should have been plenty of suspects. After all, we went out of our way to set up the possibility with Annette Weaver blasting all her neighbors at that Fourth of July picnic. But it wound up being a pretty feeble attempt at a red herring. When all is said and done, the picnic fiasco has very little to do with Annette's death. We're left with basically two trails of suspicion and when one has read enough Lockridges one knows that one of the trails is a dead-end from the beginning. So--not much mystery about whodunit in this one. The plot could have been much more interesting (and intricate) if Lockridge had made more of the possible motives of the residents who had gotten blasted.

What keeps this one from a much poorer rating (for me) is the characters. Heimrich likes to say that the character fits the crime--making character a vital ingredient in his investigations. And, for me, if the characters are good enough, I can overlook other flaws, especially in a series that I have a great deal of affection for. The Lockridge books are comfort reading for me and I can forgive occasional missteps in their various series. I enjoy Heimrich and Forniss and watching them do their stuff. I like Ray Crowley and wish that we'd had a bit more of him in this one. And it's always a treat to watch Heimrich interact with his wife Susan. We also have nice bit of deduction involving voices and vocal imitations (somewhat reminiscent of the books that involve Professor Brinkley). ★★★ and 1/2.

First line: Leslie Brennan turned her car from the blacktop into the narrow road which served as driveway to the Drakes' big house on the ridge and to the smaller house which was Annette Weaver's.

Last line: "It's time," Susan Heimrich said, "that we have something to eat."