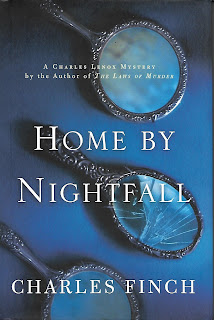 Home by Nightfall (2015) by Charles Finch

Charles Lenox finds his attention divided in this ninth entry in the series. All of London is agog at the mystery of the missing musician. Muller, the great German pianist, had disappeared from his dressing room during an intermission in his most recent London performance. He went into the dressing room, apparently drank a glass of wine, and vanished into thin air. There was only one way out of the theatre from the dressing room and he would have had to pass dozens of people backstage to leave. No one saw him. Every detective in London is looking for him--hoping to be the first to find the musician and win the favor of Scotland Yard, the public, and the Queen. Lenox and his partners are hoping to scoop their ex-partner and rival, LeMaire--especially since LeMaire has sunk to the all-time low of stealing their clients.

Additionally, Lenox feels like he needs to accompany his brother, Edward, to the family country seat. Edward has recently lost his wife to a sudden fever and is headed to the country to attend to the estate. Lenox is worried about Edward and doesn't want him to go alone. While they are in Markethouse, a spate of petty thefts occur and Lenox enlists his brother as an assistant detective--thinking that the distraction will do him good. Some of the incidents are accompanied by an odd chalk drawing and the circumstances take a vicious turn when the mayor is attacked with a knife and not expected to live. It isn't long before the two cases provide two murders for the detectives to solve.

I still enjoy Finch's writing and I've become very attached to his characters. I do wish that we had seen more of McConnell, Dallinger, and Lady Jane in this one. It seemed to me that Lenox was spread a bit too thin--trying to solve cases in two different locations and two cases that have nothing to do with one another was a bit much. It was difficult for me to keep my mind on the case most immediate in the narrative and I was constantly wondering when we'd get back to the musician. For all Muller's celebrity, he really got short shrift in this story. A pleasant read, but not Finch's finest. ★★★

First line: It was a blustery London morning in the autumn of 1879, wind and rain heavy in the trees lining Chancery Land, and here, damn it all. stood before Charles Lenox, something that nobody should have to tolerate before breakfast: a beaming Frenchman.

Last line: It was his son, Teddy, thank God, and that meant that Edmund's family, what family he had left, would all be home for Christmas.

I love Charles Finch. Thanks for putting this book on my radar.

I've only read the first Charles Finch book. I will have to look into more. Thanks for the reminder.

Here's a link to my latest historical read.