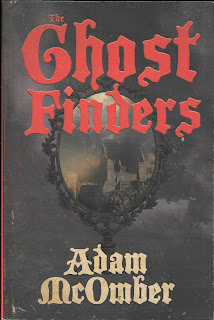 The Ghost Finders firm, founded by Phillip Langford, consists of Henry Caxton, Violet Asquith, and Christopher X. Phillip rescues Henry from the gutters of London and sets him up as an occult detective. They add Violet, a telekinetic whose mysterious past will soon catch up with her, and Christopher, a monstrous being with an unknown past and werewolf-like qualities. They take up paranormal (abnatural in the book) investigations--tracking down ghostly figures on horses, the "Up-Train Terror" (which manifested in a dark tunnel) and a tree-climbing pig, among others.

Things get really interesting and dangerous when the mysterious Sister Rose, a black-bonneted woman, begins dogging Violet tracks and the ghost finders find themselves drawn into a trap that may put a permanent end to their investigations. Each of our characters have a part to play--even the Ghost Finders' housekeeper Mrs. Hastur. How has Violet's training under her father's guidance prepared her for the trial to come? Has Henry received all the preparation he should have? Does it matter that Christopher can't remember anything about who (what) he was before meeting Henry. And what is the job that Mrs. Hastur tells him he must do? What plans do Sister Rose and the "New Lord" have for them? And who is this New Lord that is behind all the mysterious events? What is the dark mirror and can it really be controlled? Or will it destroy everything the Ghost Finders hold most dear?

This is a wonderfully gothic, horrifically fun mysterious adventure. The three main characters are vividly drawn with interesting backstories that are at once disparate, yet also fitting together so perfectly to provide friendship and kinship among these three wildly different individuals. The separate histories weave together to create the fabric necessary for the final scenes. It was interesting to watch these three work their way through various layers of loyalty and betrayal to discover what is necessary to save themselves...and perhaps all reality.

McOmber is a compelling storyteller. He creates a gaslit world with fully realized characters with complicated stories & complicated relationships and an urgent sense of place. One opens the book and immediately steps into a world of gothic creatures and paranormal manifestations....and it all seems perfectly normal. One shouldn't be surprised by a seven-foot giant with a dog-like head or bones that become animated or men who survive a fatal knife blow. And one isn't because McOmber has created a believable world where anything could happen...and does. ★★★★ and 1/2.

First line: Storm clouds over the rookeries at Spitalfields.

Last lines: I shook my head. "I think we better get our coats."