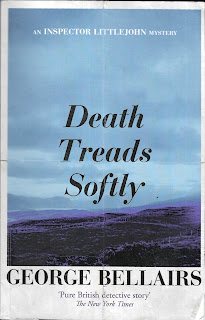 Chief Inspector Littlejohn escorts Finlo Crennell, the ex-harbormaster of Castletown, back to his home on the Isle of Man. Crennell went missing a week ago while on his nightly constitutional along the harbor. His friends all thought he'd slipped and fallen in--and been dragged out to sea. But he shows up in London with an empty memory and a constant smile on his face. He doesn't speak and shows no real interest in his hometown or anyone who is there to greet him when he arrives--not even his housekeeper (and distant cousin) whom he has known all his life. But he does have some sense of his surroundings--heading straight for where his pipe is kept and sitting in his favorite chair to have a smoke.

The doctor declares him physically sound and makes plans to have him taken to hospital the next day to see what can be done about the memory. Littlejohn, duty dispensed, plans to spend the night with his old friend Reverend Kinrade, the Archdeacon of the Isle of Man, and then return to London in the morning. But neither the doctor nor Littlejohn will see their plans fulfilled.

Later that evening, Mrs. Cottier (the housekeeper), thinking that Crennell is settled nicely, goes out to get him some beer for his usual last drink of the evening. While she's gone, habit takes over for the ex-harbormaster and he once again sets off for a evening's stroll to his favorite pub (with, I'm sure, the aim of following it with a walk back along the harbor). It's the last stroll he'll ever take. He's found outside the pub--shot in the head. Littlejohn is asked to stay on and help Inspector Knell with the investigation and the two men immediately revise their views of Crennell's earlier "accident." Someone wanted the man out of the way and wasn't taking any chances this second time. Who would want to kill this inoffensive, generous man--everyone they interview speaks well of him. And then Crennell's son-in-law is killed in exactly the same manner, though found in an abandoned farmhouse. What do the ex-harbormaster and a bankrupt farmer have in common that could result in murder?

Each Littlejohn mystery I read seems better than the last. Bellairs is rapidly moving up the list of favorite Golden Age authors. Which is very pleasing because there are so many of the Littlejohn series available through various reprint means. This is apparently Littlejohn's second (maybe third?) visit to the Isle of Man--but it is the first that I've read. Bellairs does an excellent job acquainting us with the locale and the general environs. He also gives us an interesting cast of characters from Littlejohn's friends Knell and Kinrade to the family and friends of Crennell. They are a quirky lot who all seem to keep something back from the police. It is very intriguing to watch Littlejohn get round their reticence and dig deep into the secrets behind the murders.

This outing was, I think, Bellairs's most fairly clued and neatly plotted that I've yet read. He manages to keep suspicion spread about for quite some time despite a small cast of suspects. I did spot the villain of the piece, but I didn't pick up a couple of clues that would have told me the real motive. A clever classic police procedural. ★★★★

First line: Saturday November 6th. The King Orry, Liverpool to Douglas, Isle of Man, ploughed her way through seas the colour of lead under heavy skies.

Last line: He closed the vicarage door behind him and followed the parson in.