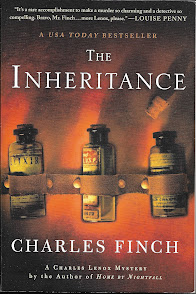 The Inheritance (2016) by Charles Finch

Charles Lenox finds himself involved more personally in an investigation when an old friend from his days at Harrow sends him a cryptic message saying he will call on Lenox at 3 pm. Gerald Leigh, who has spent years away from London on scientific quests, is back in England, is in trouble, and is looking for help. The note doesn't specify what kind of trouble--only alludes to a mystery from their school days which was never solved. That is...who the mysterious benefactor was who paid Leigh's fees for the exclusive school. Leigh's family could never have afforded the bills if "a friend" hadn't stepped in. Leigh always suspected that it was the guilty conscience of the man whose wagon had run down and killed his father, but Lenox suggested a titled distant relative. They never did figure it out.

But when the appointed hour passes and his friend has not shown up, Lenox becomes uneasy. He heads to hotel from which Leigh's note arrived, but is told that the man had left early that morning and has not returned. In fact, Lenox's message--acknowledging Leigh's note and welcoming a visit--is still sitting in the box for his friend's room. He becomes even more worried when he leaves and returns the next day to find that Leigh's red-headed "secretary" had stopped by to retrieve any mail in the box. Leigh has never, to Lenox's knowledge, had a secretary and, besides that, the description of the man matches one of the most dangerous men in The Farthings, a tough gang from the notorious East End. When Lenox and his partner Polly Buchanan finally track Leigh to a coffeehouse known as a port of refuge for the scientific crowd, they learn that the red-head and his equally violent partner had been dogging the scientist's steps since he arrived in London. But why is an East End gang taking an interest in a scientist who has been far afield?

It seems that a mysterious financial benefactor has cropped up again in Leigh's life. This time it's an inheritance to the tune of 25,000 pounds. That's the reason he has returned to England--the bequest required him to sign certain papers in person. He completed part of the paperwork and was due to return to the lawyer's office when he realized that these thugs were following him. Now he's not so sure he should accept the inheritance. And when the lawyer is found shot to death it becomes apparent that there is something particularly unhealthy about this inheritance.

Meanwhile, the agency which Lenox, Polly Buchanan, and Lord John Dallington have founded is on retainer with Parliament...and there's been a break-in. Or, rather, a break-out. Someone has been using one of the reservable rooms in the building and one evening a broken window is found. It looks like someone has been breaking and entering. But then Lenox notices that the evidence points to the fact that the window was broken from the inside...who of those eligible to be in the Parliament rooms would need to break a window to get out? And why?

For me, this book is a somewhat mixed bag. The basic mystery--who is behind the will and the thugs and why--is good. The logic of the solution and the clues I missed make for a good plot. I was a little disappointed in the way it ultimately ended--gur rfpncr bs gur ivyynva, uvf qrpvfvba gb tb nurnq naq tvir 25,000 cbhaqf gb Yrvtu, naq gur vaqvpngvbaf gung Yrvtu znlor sbetvirf uvz? whfg qba'g fvg jryy jvgu zr. Ur xvyyrq va pbyq oybbq. Ur jnf cercnerq gb qb fb ntnva--gelvat gb xvyy obgu Yrvtu naq Yrabk. V'z fbeel ohg--xrrc uvz va wnvy naq fraq uvz gb gevny.* Of course, I thoroughly enjoy the recurring characters and I was pleased to see McConnell given his moment to shine. Finch's strong points are characters and the conversations they have. It was very entertaining to watch Lenox's interactions with Leigh and Leigh's interactions with everyone.

However, quibbles aside, this is a very good story in an engaging series and I enjoyed it very much. ★★★ and 1/2.

First line: London was silent with snow; soft flakes of it dropping evenly into the white streets; nobody outside who had somewhere inside to be.

Last line: Already he looked forward to returning to see them again.

Deaths = 4 (one hit by horses & wagon; one shot; one heart attack; one natural)

I haven't seen someone hide spoilers in this way before!!

Thanks for sharing with the Historical Fiction Reading Challenge.

Marg: I just learned about it recently. I think I like it.