The Devil in Music 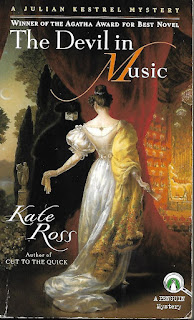 In a flashback to four years ago, Ross starts the story with Lodovico Malvezzi, an autocratic Italian aristocrat with an inordinate love of music--particularly singing. He delights in discovering little known talent, seeing the young singers trained, and then springing his protégés on the singing world. His most recent discovery is a young man who is referred to as Orfeo and he has never performed in public at all. He will be Malvezzi's most prized singer--an absolute unknown with the voice of an angel. He takes Orfeo and the Maestro Filippo Donati to his secluded castle where no one but trusted servants will see him Even his signing master will not see him because Donati is blind.

While there, Malvezzi receives a strange package containing a jeweled glove and a somewhat threatening letter. There is also a growing tension between him and Orfeo. And then one night Orfeo disappears and Malvezzi is killed. But because of the growing threat of revolutionary trouble (something Malvezzi's stern rule helped keep at bay), the authorities agree that it would be best to declare the Marquis's death a "heart failure" (rather than a shot through the heart) while quietly hunting the missing singer. Everyone assumes that Orfeo's disagreements with his patron became heated enough that they ended in murder. Why else would he disappear on the very night Malvezzi was killed?

Four years later, Julian Kestrel, his servant Dipper, and his good friend Dr. MacGregor are touring the Continent. Julian intends to continue on to Italy when the doctor decides it's time to go home.When Julian, who has become a dab hand at solving mysteries, hears that the Marquis's death has finally been revealed as a murder and that the family and authorities are reopening the investigation, he offers his services. The family immediately take up his offer of help, but the police commissari Grimani is none to pleased at having a foreign amateur invading his territory. They do manage to work together in a somewhat wary manner. It isn't long before Julian reveals that there are more secrets to uncover than just who killed the Marquis and when a second murder occurs at the same castle, he and Grimani must find the links between the the deaths...before Julian himself becomes a victim.

This is the fourth and, sadly, final book in the Julian Kestrel series. Ross's final book was her best. The writing is sublime and she provides extensive information about Julian's somewhat mysterious past. Just as the singing of Orfeo surpassed that of all the singers Malvezzi had sponsored previously, so too does this novel surpass the other three. It is interesting to see Julian out of his English element and working even harder against the established police. He not only has to seek proofs of his deductions, he must provide proofs that the antagonistic Grimani will be unable to discount. He treads a tightrope and knows one false move could see him in prison for obstructing the police and Italian prisons are not as easy to get out of as English prisons. It isn't until the very end that we realize just how precarious that tightrope was. There are several unexpected and very interesting twists throughout the plot and I have to say that they were all very satisfying. I enjoyed this very much in 1997 when I first read it and I have enjoyed it even more 25 years later--though the enjoyment is bittersweet this time around. In 1997 I didn't know this would be the last mystery with Julian Kestrel. It is very sad that Kate Ross was taken by cancer just as she was hitting her stride in her writing. ★★★★★

First line: Lodovico Malvezzi signed his name with a flourish and sat back to read what he had written: (full letter follows)

Deaths = 4 (one shot; one natural; one stabbed; one asphyxiated)

That sounds like a series I would enjoy from the beginning. It's sad to know that the end is the end because the author has passed away.