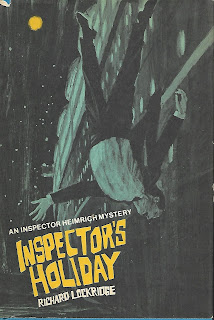 Inspector M. L. Heimrich and his wife Susan are booked for a leisurely Mediterranean cruise from late March to early May. It's just what the doctor ordered for Susan's recovery from flu compounded by pneumonia. A convalescence in warm climates will do her a world of good. And the good Inspector, who rarely takes a leave from his position with the New York State Police, could stand a vacation as well.

It starts out as a lovely cruise. The accommodations are spacious and luxurious. The food and drink is appetizing and abundant and over-indulgence seems to be the order of the day. They find themselves meeting many interesting people--including Sir Ronald Grimes, recently retired British embassy attache, and his lovely young wife; Major Ian Whitney, another British subject; Inspector Albert Hunt, introduced as Heimrich's British counterpart, but apparently more of a hush-hush secret service type; Miss Emily Farrell, a famous cookbook author; and Mrs. Raymond Powers, widow of an apparently famous businessman (though the Heimriches haven't hear of him).

When Sir Ronald disappears from the ship and Inspector Hunt is found strangled in his cabin--all in the same night, the ship's captain calls upon Inspector Heimrich for help. Heimrich tries to beg off, but the captain almost begs for assistance (no one else on board has any experience with violent death) and Heimrich soons admits that he can't not investigate when a fellow "cop" has been murdered. It isn't long before he also realizes what a difficult job he has ahead. Alone in his investigation, without being able to put the usual machinery in motion (fingerprints, crime scene detectives, easy access to any files/information on suspects, etc), and especially without his right-hand man Charles Forniss, he has to use all his wits and pull whatever strings he can from afar to find his man/woman before the ship docks at Malaga (where he and Susan disembark for a week in Spain). It helps that Forniss (when called via ship-to-shore) "just happens" to know a man at the British Embassy in D. C. (I never cease to be amazed how many people former Marine Forniss "just happens" to know....but I suppose you meet a lot of people while in the service during wartime.)

A fun entry in the Heimrich series. I don't always enjoy mysteries that see the detective out of their usual element, but I think Lockridge did a good job with this one. The set-up for why Heimrich needs to get involved is well-done and it was interesting to watch him work without the usual official support system in place. We could have used a few more viable suspects. Lockridge (through Heimrich's processes) tries to spread suspicion around a bit, but it doesn't really work well. But overall it's a solid entry in the series and it was nice to see more of Heimrich and Susan together. ★★★ and 1/2.

First lines: It was not snowing on the morning of that thirtieth of March. Heimrich had gloomily supposed it would be; had envisioned a blizzard.

Last lines: "Yes, Susan. No matter what. You bring it with us."

Deaths = 3 (one heart attack; one drowned; one strangled)