With Option to Die 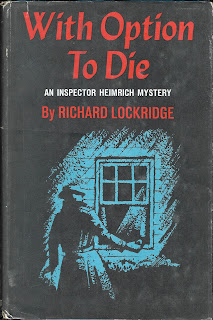 With Option to Die (1967) by Richard Lockridge

When Ann and Eric Martin rent a country house in North Wellwood, New York, they find themselves in the middle of a divided community. The current uproar is over the request for a building permit for a new, integrated country club. Thomas Peters, a well-known African American lawyer, had moved into the area with this grand plan to make a club where everyone (or at least everyone who could pay the membership fees) could gather--no restrictions. But North Wellwood is a conservative, Republican town and there are many folks who don't care for the idea at all--not that they have anything against people of color, you understand...but the location isn't right OR it's a fine experiment but can't we experiment somewhere else first? Of course, there are those who are downright hostile and those folks get even more stirred up when outside influences under the name "Patriots United" hook up with members of the North Wellwood Preservation Association. A high-profile instigator in Patriots United is spotted in the town. There's general name-calling (using "liberal" as a derogatory term isn't anything new it seems) and complaints that those who want to change things are communists or socialists...or worse.

And then there's murder. Mrs. Faith Powers, who has been vocal in her support of the club, is shot as she's out driving in her little Mercedes. Lieutenant Forniss takes the lead in the investigation with the recently-promoted Inspector Heimrich leaving his desk often to "delegate" on the spot as it were. (It takes time to get used to a new position with less field work...) Then the newspaper office (where an editorial in support of the club had been printed) is attacked with a dynamite booby-trap attached to one of its presses. And the Martins suffer a round of attacks, culminating in a couple of hand grenades tossed in the windows. Ann works as an investigative reporter and had recently been credited on a television program about racial conditions in the south. So, even though the Martins are new to town, it's obvious where their loyalties lie...Forniss and Heimrich will have to decide if these incidents are all of a piece or if there are other motives hidden in the racial unrest.

The more things change...the more they stay the same. Racial unrest. "True Patriots" vs. Liberals. What a familiar ring this Lockridge book has. It is an excellent view of how propaganda and a hate compaign can take over the most calm and quiet communities. How evil--whether in the name of racial hatred or using that hatred as a cover for other crimes--can flourish with just a little wind to fan the flames.

It is also a nicely plotted mystery and it is fun to watch Heimrich try and get comfortable in his new role. The old war horse has a difficult time staying out of the thick of the battle, but Forniss makes a good detective in his own right and gathers plenty of evidence on his own. Another good read in the Heimrich series. ★★★★

First line: The blacktop drifted up a gentle slope, and old maples with spring's young leaves arched over it.