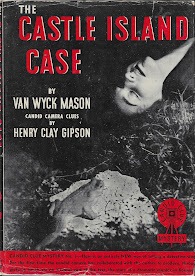 Major Roger Allenby, ex-Army Intelligence and current crack investigator for the Inter-Ocean Life Assurance Company, is headed to Plunder Island (a fictional appendage of Bermuda) to investigate the suicide of one Judy Fortier, secretary to the well-known financier Barney Grafton. The company is not satisfied, but doesn't want to stir up trouble with Grafton, so Allenby's cover is that he is a banker who is considering an option in Grafton's latest financial coup--a mining concern in South America. There will be a fairly large house party--including fellow prospective investors Terry James, Stanley Gibbons, and Sir George Pakenham as well as Grafton's daughter Gail, Patricia Fortier (who has come to pack up her sister's belongings), Stanly Gibbons (who may or may not be interested in Gail, Kathleen Manship (who may or may not be interested in Stanley),  and Cora Sue Pendleton (Southern belle and friend of Gail's who is interested in anything in trousers).

It was thought at one time that Grafton would marry his secretary, but he wound up marrying wealthy Boston socialite Barbara Wilson instead. It's possible that Judy never got over the love affair gone bad and took her own life, but as Allenby meets the Grafton entourage, he senses tensions and undercurrents that may speak to other motives. When other deaths follow the apparent suicide, it becomes clear that things are much more complicated than the police first thought. There are romantic motives as well as financial ones...not to mention a suggestion of voodoo. Allenby and Inspector Boyd will clear everything up...using photographic trickery as well as evidence.

This is an interesting and unique addition to the crime fiction of the 1930s. Mason's detective story is told through both his text and the pictures provided by Gipson. It gives the novel the feel of a documented true-crime piece rather than a fictional tale of murder and mayhem. The photos throughout the story make the reader feel as though she were part of the house party. We see pictures of what Grafton's Bermuda mansion looks like, the beach and cliffs surrounding the house, and the members of the house party. We get both posed and candid shots. Among what seems to be normal vacation pictures that anyone visiting the island may have taken are hidden clues that will allow the observant reader to solve the mystery. Was I observant enough? Well, no. I did pick up some of the clues in the pictures (and text), but not as many as I should have and I didn't quite get the solution right. But I did enjoy myself and this unusual mystery.   ★★★ and 1/2

First line: At three thousand feet the Bermuda Clipper's Chief Pilot had leveled off, leaving behind the angry welter of thunder heads which, by two hours, had delayed departure from Port Washington Airbase.

Last line: There was a silence as, very tenderly, young Tvoobaf led Gail away from ure sngure'f obql. [Bolded text is encrypted because spoilers--to decode, copy bolded portion and use this site: ROT13.]

Deaths = 3 (one stabbed; one strangled; one shot)