Whom the Gods Love 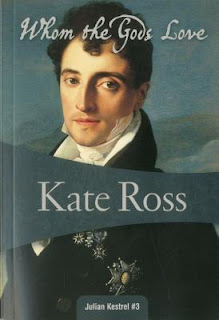 When Alexander Falkland is murdered in his own study while a house party was in full swing just a floor above, his father Sir Malcolm Falkland asks Julian Kestrel to assist the Bow Street Runners in bringing his killer to justice. Sir Malcolm adored his son--a man he thought perfect in every way. Perfect in looks, accomplishments, marriage, and in choosing to follow his father into the law as a profession. But obviously someone thought Alexander less than perfect. Someone hated or feared him enough to strike him down with a poker.

Julian accepts the commission, but not before warning Sir Malcolm of the consequences.

You must realize, Sir Malcom, these investigations can turn up painful, even shocking information....I shall ask impertinent questions, respect no one's privacy, treat nothing as sacred, and everyone not absolutely cleared as a suspect. I don't say this to alarm you--merely to make you see that, in embarking on an investigation like this, you must ask yourself, not merely what the truth is, but whether you wish to know it.

The lawyer assures him that he wants nothing but the truth, no matter what it is, where it leads, or to whom the finger of guilt points. That assurance will be tested more than once as the investigation progresses--for it soon becomes clear that Sir Malcolm didn't know his son at all and few people did.

Alexander was heavily in debt and his new friend David Abrams had bought up all his promissory notes...and then forgave them, apparently without requiring payment. But there is more than one way of paying off a debt. It's also proven that Alexander wasn't nearly the devoted husband that he liked to play in front of the world, and his tastes in extracurricular activities don't bear great scrutiny. And then there is the fact that he wasn't the scholar and devoted law student his father thought him. He had some sort of hold over Quintin Clare (a fellow law-clerk) and Clare is the one who wrote knowledgeable letters to Sir Malcolm and who primed Alexander with topics to discuss in the lawyers' dining hall. It seems that Alexander Falkland was a fraud in nearly every area of his life. But which area was the one that brought about his death?

When Alexander's widow is thrown from her horse, resulting in the loss of the child she was carrying and it's found that her saddle had been tampered with, it looks as though someone wants to wipe out all trace of Alexander...including his unborn child. Julian fears for Belinda Falkland's safety and redoubles his efforts to find a clear trail to follow among the various byways in Alexander's hidden life. And he wonders again whether Sir Malcolm will want the truth once he finds it.

The Julian Kestrel series just gets stronger with each book. The mystery here is tightly plotted and Ross expertly brought all the threads together to create a solid fabric. Great period details and interesting, well-rounded characters. Alexander is the least vivid--more a caricature of the ultimate bad hat, yet still a good focal point for the plot. Julian's detective work is the most workmanlike of three novels so far--perhaps because he's working closely with Vance, the Bow Street Runner. He sets down a timeline of who was where when and checks witness statements against one another. He spends a greater amount of time interviewing the principle witnesses/suspects and discovers several material clues. A very nicely put together mystery. ★★★★

First line: Go through the holly archway, Sir Malcom's letter had said, then take the long, straight path, past the church.

Last line: And so it happened here.

Deaths = 5 (two hit on head; one throat cut; one accident; one natural)

This sounds like a setting and a mystery that I would enjoy.

Joy, these are really good historical mysteries. It's a shame that Kate Ross died so young from cancer and we only have four stories in the Julian Kestrel series. It was shaping up to be a fine series.