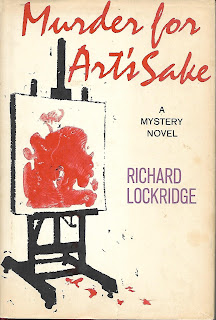 Shackleford Jones had a high opinion of himself as a painter--one time insuring one of his paintings in transit to a gallery to the tune of $100,000. Maybe too high and got his egotistical bubble burst. He's found one morning in his studio, shot with his own gun, and the Precinct cops think he did it himself. Because apparently, according to the gallery owner who displayed and sold his work, he had "painted himself out," run out of what talent he had. Lieutenant Nathan Shapiro isn't sure they aren't right...except...there are just a few niggling things. Like the fact that others in the art world say that Shack (as he signed himself) was painting better than ever. And the fact that a certain list of his paintings has gone missing. And that he had painted a very revealing portrait of the wife of another man. And the fact that after he's dead just about everyone who knew him comes sneaking back into his art studio for reasons that sound decidedly fishy to the good lieutenant. Not that anything these people in the art world do makes sense to Shaprio. Why on earth does Captain Wiegand insist on giving Nate cases where he knows good and well his subordinate will be out of his depth?

Poor Lieutenant Shapiro. He really is the Eeyore of the detective force--very gloomy, with little self-confidence. It doesn't matter how many times he goes "out of his depth" and solves the murder, he still thinks it only happened through dumb luck. It couldn't possibly be that he really is an observant man who notices oddities that don't add up until he finally makes the sum into a solution that gives him the murderer. In this case, it is the matter of phone calls made in April, the shaving of a "signature" beard, the timing of some screams and footsteps, and the question of who painted a picture labeled "Cityscape" that keep puzzling Shapiro until he finally sees the whole picture. He is assisted by Sergeant Tony Cook...and Bill Wiegand's wife Dorian, who guides the detectives through the sometimes baffling world of artists and their masterpieces.

The Shapiro novels are a little darker than the Pam & Jerry North (with Bill Weigand) and don't have as much of the light humor, but they take place in the same areas of New York City and we run into familiar faces. The good lieutenant could use a good dose of confidence, but, like Eeyore, I do find him charming and endearing. And, despite his feeling that he's just a guy who's good with a gun (and he does have to shoot a weapon out of a bad guy's hand...), he is a good detective as well...as Captain Bill Wiegand knows. ★★★★

First lines: She paid the cabdriver. She stood on the sidewalk and watched the cab roll slowly down the street to the next corner.