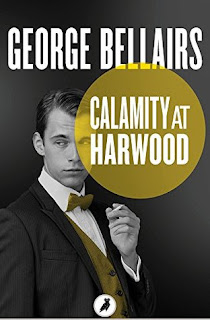 The bulk of the story is set in 1939 and the war is just heating up for Britain. The blackout is prevalent and women and children have been sent out of London. Before we get to the main thread, we're given a prequel. We see Mr. Solomon Burt (né Bernstein), a real estate developer, get stranded near the Harwood manor house. While his chauffeur fiddles with the car engine, he decides to take a stroll and explore the area Though the grounds are not all they should be and the house is in disrepair, Burt immediately sees possibilities. And though the owner says he'll never sell, the canny businessman soon has possession.

He has envisioned a renovated manor house with luxury flats, immaculate grounds, a swimming pool, tennis courts, and all the comforts that the well-to-do would like in a little country get-away. Work begins, but all is not smooth sailing. Wiring is pulled out, water pipes burst, and an ornamental ceiling caves in. The locals talk of ghosts and poltergeists, but Burt doesn't believe in such nonsense (and can't afford to--he must get the flats done and get some wealthy residents). Finally, the outbursts cease, the renovations are complete, and all eight flats are leased--with Burt taking one for himself.

All but one resident (who is abroad and will move in later) get settled in and it looks like everything is turning out just as Burt planned. But then...the ghosts and poltergeists start in with a renewed vengeance. Appliances are turned upside down and placed in the sink in one apartment. Another resident's pantry is demolished and all the china broken. One couple hears the sound of dice-playing all night (apparently there was a Regency-era gaming hell in the house at one time). And another resident experiences blasts of hot and cold air. Barring Miss Elaine Freyle, a West-end actress, all of the residents insist they'll not let ghosts and ghoulies run them out of their cushy new digs. Miss Freyle breaks her lease and leaves.

Mr. and Mrs. Carberry-Peacocke are amateur psychic researchers, so they are pleased as punch. They hold seances and even get their neighbors, Mr. and Mrs. Hartwright interested. Professor Braun, an Austrian refugee and anthropologist, is too grumpy to allow mere ghosts interfere with his work--besides, he says he hasn't heard any of the disturbances. Mr. Williatt is a writer and sees the whole thing as an experience made for putting into fiction. And the Misses Pott are stubborn spinsters who refuse to be scared off. Besides ghosts can't really hurt anyone...can they?

Apparently they can. Because one night a couple of Regency-era spooks show up in Mr. Burt's bedroom. They hustle him outside, force him to disrobe, and plunge into the icy pool. While he's getting himself back on dry land, the ghosts disappear--along with his clothes. He finds a couple of burlap sacks left behind by the workmen and manages to make himself fairly decent. But after he manages to get himself back into the house and upstairs, the lights go out, there's a loud crash, and the next thing the residents know is that Burt has fallen from the upper story and broken his neck.

Enter Inspector Thomas Littlejohn of Scotland Yard. As soon as the doctor examines Burt, we know that murder has been done. The developer was socked over the head before being dropped off the second story landing. Littlejohn is certain that there is more to the ghostly visitations than meet the eye and he wonders if Burt stumbled onto something worth killing for. The locals make his investigations difficult at first, remaining loyal to the Harwood family (even if they are no longer in residence), but once he can get them to talk he's able to clear away much of the extraneous matter--leaving him with indications that the luxurious manor house may be sheltering a cell of Nazi sympathizers. When he finds the murderer, he just may find an espionage ringleader as well.

This was great fun and a different sort of Littlejohn story from those I've previously reviewed. The mystery of the poltergeists/ghosts was easily handled, but it was cleared up in order to make way for the more intricate espionage/thriller plot. I thoroughly enjoyed Littlejohn's investigation into Nazi fifth-columnists and the story was worth it just for the scene where the country policeman takes out one of the spies with a nicely bowled stone (using his excellent cricket skills). I also enjoyed the information gained about Britain during the early days of the war--adding to what I already knew from other period mysteries. All-in-all one of my favorite Bellairs books to date. ★★★★

First line: One afternoon in the late autumn of 1938, the large, flashy car of Mr. Solomon Burt (né Bernstein) came to a halt on the London-Brighton road.

Last lines: "It's been a rest and a change," said Littlejohn as they stepped into the blackout again. "What are you laughing at?"