A Plate of Red Herrings 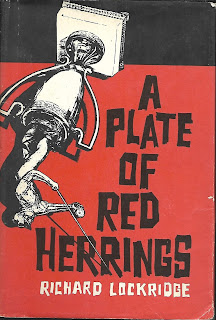 The United Broadcasting Network throws a grand party for the editorial staff of its newly acquired property The Guardian magazine. Well, the staff better drink up, it will make the big news of the evening go down a little smoother. Maybe. Bryan Colley is a network axe man who has been brought in to cut out the dead wood. And six staff members are called in for private meetings during the course of the evening to be told that their services were no longer needed.

"Clean sweep" Colley apparently enjoyed telling everyone the bad news. This included Kent Simpson, the fiction editor; Nora Curran, the assistant fiction editor; Dr. Clifford Armstrong, a historian writing a book for which The Guardian had given advances; Rosalie Shaffer, the fashion editor; H. R. Stubbs, the advertising manager, and Mr. Fremont, the religious editor. He apparently enjoyed firing people so much that he recorded the meetings on tape--perhaps so he could savor the powerful feeling of destroying lives one more time?

When Bryan Colley is found murdered in that same office, having been stabbed with the metal fishing pole attached to to fishing trophy, that recording becomes exhibit A in the police's evidence. It provides them with a nice platter of red herrings amongst which a murderer can hide. Bernie Simmons, assistant D. A. sits in on the case, even though Lieutenant John Stein has his eye on his friend Nora as prime suspect. Bernie knows Nora couldn't have done it--but will the evidence prove his private opinion to be correct? And can he keep his personal feelings out of his very public job if he's wrong?

I really enjoyed this one when I read it the first time. That's not to say that I didn't enjoy it this time, but this is the first of the Lockridge books that I've read again (after a very long time) where I absolutely remembered the plot from the opening pages. Every bit. That doesn't usually happen--my memory has gotten sieve-like enough that certain bits might be familiar, but I don't normally remember everything. It did make it a little difficult to really sink into the story as I normally do with Lockridge books.

I did still appreciate the set-up--the serving up of the suspects through their own recorded conversations with the deceased. It's not often the police get a word-for-word rendition of the victim's last conversations. I also enjoyed how Lockridge plays with that set-up to use it to force certain expectations. I gave the book four stars on my previous reading and I'm going to let that stand. ★★★★

First line: The party was set for a Friday afternoon in early July.

Last line: "Perhaps we might have one more before we go out to dinner, dear."