The Mystery of the Talking Skull 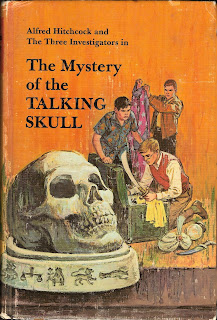 The Mystery of the Talking Skull (1969) by Robert Arthur

Jupiter Jones, chief investigator of The Three Investigators detective agency, decides that he wants to attend an auction and brings fellow investigators, Pete Crenshaw and Bob Andrews, along. It's all part of the gathering of experiences so they can be well-informed detectives. While at the auction, Jupiter becomes interested in an old trunk that belonged to the Great Gulliver. The Great Gulliver was a mediocre magician who had one great trick--a talking skull who could predict the future. He is the only bidder and becomes the proud owner for only $1.

He's barely taken possession of the trunk before people start clamoring to buy it from him. There's the elderly lady who reached the auction just moments too late to bid and offers $25 for it, and Maximilian the Magnificent who flaunts $100 and claims to want the trunk of his good friend Gulliver "for old times sake." There's also the mysterious men who keep hanging around The Jones Salvage Yard, owned by Jupiter's aunt & uncle, and who try to steal the trunk. Obviously, the trunk holds a valuable secret--but is it more than just a talking skull magic trick? Once Socrates, the skull, begins talking to him, Jupiter and The Three Investigators just might find out! [synopsis from previous review--full review at link above]

I read this one five years ago in a fit of nostalgia...and because it fit the Birth Year Reading Challenge I was doing at the time (yes, the book is every bit as old as I am...). I read a more recent edition found at our local library and mentioned at the time that I was disappointed that Alfred Hitchcock was no longer the boys' sponsor. Since then I found a 1969 edition and decided to revisit the book (courtesy of another challenge's random selection process). As a collector as well as a reader, it was a very pleasing experience to read this in the original format even though Hitchcock's presence didn't really add much to the proceedings beyond nostalgia. But nostalgia can go a long way sometimes and this made for a nice, cozy morning's read. ★★★

First line: It all started because Jupiter Jones read the newspaper.

Last lines: A talking skull! What would they come up with next time!

Oh man, I love the Three Investigators. I've collected as many as I can, and now I'm going to have to grab the Talking Skull one...