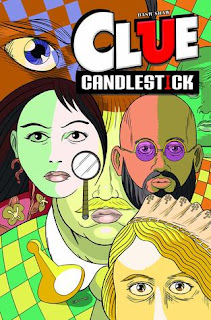 Shaw has taken the classic Clue board game and created a story based on the characters. There are clues dropped throughout and there are puzzles to solve that will help the reader discover the ultimate culprit. But it isn't just a matter of saying "Colonel Mustard in the billiard room with the lead pipe." There are several murders and it isn't necessarily so that they all were committed by the same hand. So watch out for red herrings and false villains.

So...I went down an online rabbit hole searching for an e-copy of Nancy Drew and came up with this graphic novel based on the mystery board game. The plot is basically okay and the mystery is pretty good for story length. But...I don't really think Shaw has captured the feel of either board game or the 1985 movie. Which may have been the point--but for those of us who grew up on the game and who really enjoyed the movie, it was a bit of a let-down. It seemed a bit odd for Shaw to give us a whole essay at the end where waxes nostalgic about playing the 1972 version of the game (the version I myself played for years) and then to miss the mark in creating a story about it. ★★★

Deaths = 7 (one shot; three hit on head; one poisoned; one stabbed; one died in fire)

Oh dear! I see it is not just me who did not strike it lucky with a Cluedo themed book. Yours still sounds better than mine though!

It's too bad the story was not written well. Using a board game for a plot idea is genius.