The Laws of Murder 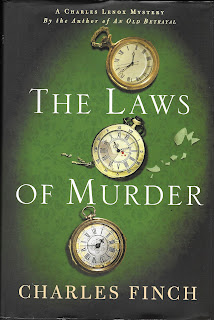 Charles Lenox has left Parliament and thrown his luck in with John Dallington, Polly Buchanan, and LeMaire to open the first cooperative detective agency. Things don't go well from the start. The newspapers seem to have a made a dead set against them and even former friends and colleagues at Scotland Yard are quoted making disparaging remarks about the venture. Lenox, in particular, seems to be a target and as the agency gets underway few cases come his way.

But worries about the agency are put aside when Inspector Jenkins is found murdered and Inspector Nicholson comes to ask Lenox to help investigate. Apparently Jenkins left a message that if anything happened to him, Lenox was to have all his notes and should be allowed to help investigate. Lenox absolutely wants to avenge his friend's death....and, of course, also hopes that a successful investigation will bolster the agency's reputation. It's hard going, though. Jenkins's notes have disappeared and the only thing found on his person is a claim ticket that doesn't seem to belong to any of the usual places for stashing items.

When Lenox realizes that Jenkins was killed just opposite the house of Lord Wakefield, a man they had been trying for years to find evidence enough to convict of many crimes, he suspects a connection. But then Wakefield is found dead as well and all of his ideas are turned upside down. It will take all of his powers of detection...as well as that of his partners and Inspector Nicholson...to connect all the pieces of the puzzle and identify the culprit behind Jenkins's murder.

Not a fan of letting a primary villain of the piece off easy. When the mystery was wrapped up a couple of chapters before the book ended, I had hopes that more details would come to light and Mr/s. X would get their full desserts. Well...more details did surface, but they didn't do anything to secure Mr/s. X's conviction of the murder. Instead we wind up with someone else who is involved committing suicide by poisoning (while in jail!) and writing a "confession" to take all the blame. So our culprit gets off with a slap on the wrist for lesser charges.

I also didn't much care for the use of Jenkins to make life difficult for the fledgling detective agency by giving them bad press for money. Jenkins seemed to be more honorable than that (in previous books) and also seemed to be far more friendly to Lenox and company. I just don't see him doing it--I don't care what bills were due. And speaking of the fledgling detective agency, Lenox is a bright man. I didn't find it terribly realistic that his skills would have deteriorated that badly while he was in Parliament--especially since he kept his hand in and was involved in several cases while he was serving in the government. Not to mention keeping up with Dallington and discussing his cases. The whole difficulty among the partners in the agency was a bit off-putting.

[As an aside and as I've mentioned in reviews of previous entries in the series...I wasn't enamored with the story line with Lenox in Parliament over the last few books. He was a good detective. He enjoyed detecting. I wish we could have just let him keep on detecting without sidetracking off into government.]

The mystery itself was solid enough and I appreciated the good detective work that was done (once Lenox stopped bemoaning the fact that his skills just weren't what they used to be and we got away from meetings where it was underlined that he wasn't pulling his weight). There were some nice twists and with a few more bits of good solid evidence, Lenox and Inspector Nicholson could have tied all the criminals up quite nicely. ★★★

First line: A late winter's night in London: the city hushed; the last revelers half an hour in their beds; a new snow softening every dull shade of gray and brown into angelic whiteness.

Last line: He closed the door behind him as quietly as he could--his heart filled with happiness.

A pity that you don't enjoy these later books more.