The Corpse with the Grimy Glove 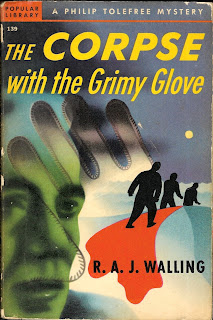 This is the 15th entry in the Philip Tolefree series, but it's my first introduction to Walling's insurance agent cum private detective. Tolefree is an intelligent, upper-class investigator who knows how to be discreet. His adventures are told by his "Watson" James Farrar. Farrar is the one who gets Tolefree involved in the current mystery. His old acquaintance Arthur Treglohan invites them to Bosenna, a small seaside town, which lives in the shadow of Lanivet Castle and Sir James Lanivet. Treglohan is the parson of Bosenna rectory and is acting at the behest of Lanivet's sister, who fears that her brother is caught up in some murky doings.

He asks Farrar to bring along his friend "with some skill in puzzling out mysteries" in the hopes that Tolefree will be able to discern what hold an unsavory financier by the name of Tenterton has over Sir James. Miss Lanivet can think of no good reason why her brother would invite such a man to a shooting party with their own friends--especially when it is obvious that everyone in the party has reason to hate Tenterton. She wants Tolefree to protect her brother, but it soon becomes obvious that Tenterton is the one who is afraid. With good reason...

Tragedy strikes during a fireworks display on the Lanivet estate. Tenterton is found bound and gagged, with bruises around his neck, wearing one oil-smeared white glove and a bullet hole in the middle of his forehead. Everyone was milling about the place all evening and no one can say where anyone else was for sure. Tolefree knows that the servants and friends and even the townspeople all have deep loyalty to the Lanivet family and won't say anything that might implicate someone up at the castle. He also knows that there is much to be explained before the truth will be found. Such as...who are the three young men in sailing vessel off the coast and why do they take stealthy skiff voyages up the waterway leading to the castle? Why hasn't Lanivet said anything about the shot that nearly hit him in the woods? Why did it take so long for the footman John to report seeing Tenterton's body on the tennis court? What was the round object that Tolefree found in the dust near where the financier had been shot? And what is the previous case that this one reminds Tolefree of so much?

I do enjoy Walling's style and story-telling. And I really like Tolefree and Farrar and their interactions with each other and the cast of characters. The plot is intricate and interesting, but I don't think Walling plays fair. Tolefree takes a leaf out of Holmes's book--keeping clues to himself. Until he springs his deductions on us, there really isn't any way for the reader to know what the motive is. I identified the culprit...but I couldn't have given you solid reasons why simple because Tolefree is holding many of the reasons/clues so close to his chest. Entertaining. And I am looking forward to the four other Walling titles sitting on Mount TBR. ★★★ and 1/2

First line: That a clergyman started Tolefree on the inquiry which led to his unravelling of the tangled horror of Bosenna was not the least unusual feature of the extraordinary affair.

How easy sleuthing would be with an invisible cloak. (Philip Tolefree; pp. 22-3)

Next time I think we'll keep out of range. Detectives are more useful alive than dead. (Tolefree; p. 25)

Last line: We know the most secret man who ever brewed beer, and the smartest young woman who ever lost her memory, and the only parson who ever went to paradise before his time.

Deaths = 5 (two shot; one airplane accident; one hanged; one drowned)