The Man in the Moonlight 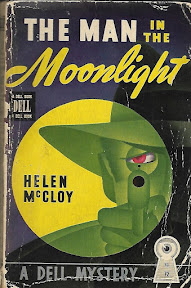 The Man in the Moonlight (1940) by Helen McCloy

The Man in the Moonlight is one of my favorite subgenres in mysteries--the academic mystery. It is set during World War II and features the campus of Yorkville University. Assistant Chief Inspector Patrick Foyle has been visiting the campus in anticipation of the possibility of sending his son there for college. As he's preparing to leave the grounds, he picks up a paper flying in the wind only to read:

I take pleasure in informing you that you have been chosen as murderer for Group No. 1. Please follow these instructions with as great exactness as possible.

The paper goes on to detail a rendezvous at Southerland Hall later that night. Foyle is ready to put it down as an undergraduate rag or some sort of joke. But he is curious and makes his way to the building mentioned. On the way there he hears a pistol shot. Perhaps it's not a gag and someone started proceedings a bit early. But he finds only Professor Raymond Prickett running a psychological experiment on babies' reactions to loud, unexpected noises. [Odd as it may seem, babies cry when exposed to loud, unexpected noises. I could have saved him the trouble of experimentation.]

There are some hours to go before the rendezvous mentioned in the instructions and Foyle decides to go have dinner and then return to campus and see what exactly is up. During dinner, he overhears another member for the Yorkville faculty, Professor Julian Salt, having an unsatisfactory conversation with his estranged wife. His detective instincts can't help but be interested in the melodrama, but his mind is on Southerland Hall...and more particularly, the laboratory of Dr. Franz Konradi, a biochemist who is a refugee from the Nazi invasions across Europe. Foyle had met Konradi briefly, asked him some questions about the situation and was told that no matter what happened, if Konradi was found killed it would not be suicide...no matter how things looked

He goes back to campus where a young woman tries to dissuade him from going to Southerland Hall. But he's determined and is just in time to watch one of the psychology graduate students (Ian Halsey) perform some very odd actions in a darkened room--lighting a candle, reading from a book, drinking wine, and typing steadily. This goes on for several minutes until a shot rings out. The lights won't come on and the doors and windows are all locked (someone locked the door behind Halsey and Foyle). While they're fumbling in the dark, the murder breaks through a window in the janitor's room (the only breakable window in the place). When they manage to get the lights on, they find Dr. Konradi shot through the roof of the mouth with all the hallmarks of a standard suicide, barring a suicide note. But Foyle remembers what Konradi told him and calls in Dr. Basil Willing, a psychological consultant for the police because as Foyle tells him, it's "right down your alley, doc!" It is indeed, and Dr. Willing will have several very interesting psychological clues to follow up before they'll be able to identify the correct culprit.

First of all, I have to say how very grateful I am to the late Noah Stewart for this lovely Dell mapback copy. He sent it to me as part of one of our Golden Age group Secret Santa gift exchanges. I am only sorry that I did not read it sooner so I could have discussed it with him before he was taken from us much too soon. He knew of my great love for the academic mystery and was thoughtful enough to include this delightful little book in my box of goodies. 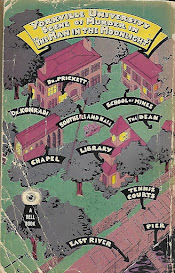 It is, in addition to being a fine mystery, a very good look at the U.S. (and the world) at the time of second world war. We get good descriptions of the situation for refugees, prisoners of war, and the tricky state of trade. We see how precarious fortunes were when they depended on goods needed for the war--especially if any changes in materials might be in the offing. The mystery itself is well-plotted and McCloy pulled the wool over my eyes quite nicely. A very good read.★★★★

It happened during a psychological experiment--at least that's what they say. Sounds phony to me. That's where you come in. I want you to tell me if it's on the level. There's a guy here named Prickett and he's a three-ring circus all by himself--but wait till you see him. (Inspector Patrick Foyle to Dr. Basil Willing; p. 39)

But do the police realize that this is only a detective story? I'm afraid they'll forget the murderer must
never be a Chinese when they find I have no alibi. (Dr. Feng; p. 96)

Last line: That's not an invitation--it's an order!