Death of an Angel 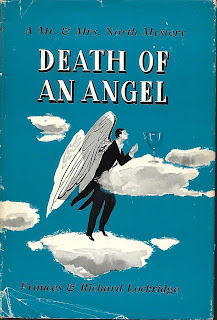 Death of an Angel (1955) by Frances & Richard Lockridge

Pam & Jerry North find themselves plunged into a mystery in the theater world. Sam Wyatt, one of the writers in the North Publishing stable, has written a play called "Around the Corner" that has set Broadway on fire. And the Norths, for the first time ever, have played angel (in a very small way) and invested a small amount in the production. The show's star, Miss Naomi Shaw, shines in the production and it has just hit the 100th show milestone. The "nut" (initial production cost) is about to be paid off and that means that the profits are finally going to start pouring in. If everything goes right, Wyatt will have Hollywood studios fighting for film rights and the producer Wesley Strothers will finally have his big hit after a run of near-misses.

But then Bradley Fitch--wealthy playboy, polo star, and one of the show's biggest angels--throws a wrench into everybody's plans. Having gained access to the actors and, most particularly, the actresses, he's fallen hard for the play's star. He chooses the 100th night celebration party to announce that he and Naomi are going to be married.

"Going to seal your girl, cousins....Put her in my pocket."

And by that he means steal her right off the stage, in mid-run. The show will close and there will be no more standing room only crowds panting to see Broadway's biggest hit. He blithely suggests that they can just get another girl and go on with the show. But everyone knows that there's no way anyone could step into a role that Naomi Shaw had so clearly made her very own.

Naturally, a lot of people are pretty upset when the announcement is made. Sam Wyatt isn't precisely ecstatic to watch Hollywood dreams fade. Wesley Strothers is pretty sore that his big hit (finally!) won't run another night. Jasper Tootle, Naomi's agent, is pretty put out that he won't be getting a percentage on her contracts any more. The other leads in the play, Phyllis Barnscott and Sidney Castle, aren't exactly thrilled to see the possibility of Broadway stardom going down the drain. But it isn't only professional feathers that get ruffled. Fitch's relatives, Mr. and Mrs. Nelson have counted on the perennial bachelor remaining single. After all, they're his nearest and dearest and most likely to benefit under his will...if he finally ties the knot then their dreams of owning that lovely penthouse apartment will go up in smoke. And...there's Naomi's ex-husband who stalks out of the 100th show celebration turned engagement party like he still has a personal stake in matters.

Well, of course, somebody decides this situation just won't do. So, the morning after Fitch throws a stag party to celebrate his forthcoming nuptials, his housekeeper finds him dead with the remains of a hangover cure beside him. A deadly dose of oxalic acid added to his pick-me-up has ended the threat to Broadway's latest hit. Enter Acting Captain Bill Weigand and Lieutenant Mullins who just happen to be on load to Homicide East (due to a rash of emergency leaves). Of course, the Norths are in it too--from their connection to the playwright to the fact that one of their monogrammed cocktail napkins is found in Fitch's apartment. Bill naturally keeps them up-to-date on proceedings and Sam Wyatt keeps popping in to have his hand held--he's absolutely certain the cops are going toss him in jail at any moment.

This outing marks one of the few times that Pam is wrong. She normally jumps to the right solution, though following her thought processes is usually a bit tricky. But this time she is very surprised by Bill's selection of culprit. I have to say (even though I have read this before) that I was too. I was absolutely sure I had seen through the red herrings to correct culprit...only to be wrong. In fact, I'm pretty certain I picked the same person that I picked the last time. Again, thinking I'd cleverly avoided the pitfalls of false clues. Another fun outing with the Norths. ★★★★

Last lines: But they must, Pam said, be very careful not to drink too much, even to celebrate. Because hangovers are so dangerous.