The Mystery of the Stuttering Parrot 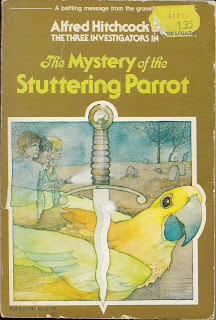 The Mystery of the Stuttering Parrot (1964) by Robert Arthur

The second book featuring The Three Investigators, Jupiter Jones, Bob Andrews, and Pete Crenshaw. This adventure starts with a request from their mentor Alfred Hitchcock to help his friend Malcolm Fentriss find his missing parrot. The boys wind up tracking down not one parrot, but six...plus a mynah bird. It winds up that the birds, named after literary and historical figures, can quote portions of a riddle taught them by a man named John Silver. And if they can find the birds and decode the message they just might find some buried treasure. But there is large man with a devilish temper and a cunning European thief hot on their trail. They're going to have to be quick to outwit those two. It all ends with a confrontation in a spooky, foggy graveyard.

I somehow missed this adventure in the Investigators' chronicles when I was young. And, boy, did I miss a good one. This has it all--adventure, nasty bad guys with threats, a hidden treasure, a coded message to decipher, and Pete gets to do some action hero moves on the bad guys in the end while Jupe figures out all the obscure clues and Bob plays decoy to try and lure the villains away from the treasure. We meet Carlos, a very observant Mexican boy who gives the young detectives some good clues and helps them identify the car belonging to the large man. This is one of the best of The Three Investigators' mysteries. ★★★★★

First line: "Help!" The voice that called out was strangely shrill and muffled.

Last line: Slowly and thoughtfully, he gathered up the newspapers and stacked them in a neat pile.