He'd Rather Be Dead 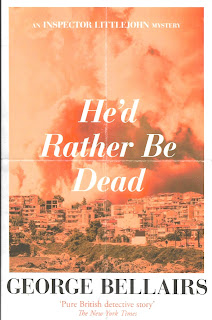 Sir Gideon Ware has a positive talent for ticking people off. Several years ago, he settled in Westcombe and as soon as he did he set about turning the little town on its ear. He changed the quaint little seaside town into a huge, bustling boardwalk with sideshows and Coney Island-style rides and dance bands. There are tourists everywhere, up till all hours, carousing and carrying on. He gets his way through a combination of bribes, blackmail, and under-the-table deals. And then, somehow, he manages to get elected mayor. He then adds shaking up the town's social sphere to his agenda--appointing men to positions they shouldn't hold and ousting men who have long held other positions.

Per tradition, the town leaders welcomed him to office with a dinner in November and now, in August, it's his turn to provide a lavish dinner in return. He plans on having a grand time watching the fun from his seat of honor. He's deliberately seated bitter enemies next to one another in an effort to add a little spice to the dinner. He rises from his seat to offer a toast to his guests and promptly falls down dead--apparently from poison. The Chief Constable, knowing that Ware had shoehorned him into the position and that some might look askance at him investigating this particular murder, decides immediately to call in Scotland Yard. And so we have Inspector Tom Littlejohn on the job. The Chief Constable is little help, but Detective-Inspector Hazard prove invaluable in providing background and assisting with the legwork and soon Littlejohn is well on his way to finding out who shoved the Mayor out of office--permanently.

Maybe I'm becoming a little jaded, but this is the second vintage mystery in a row that I've read where I just don't feel like suspicion is spread around convincingly. I mean here we have Ware killed off at a dinner where he's surrounded by all sorts of people who have had run-ins of one sort or another with the man and Bellairs immediately narrows the field drastically when he reveals the basic method by which the poison was introduced. And, the way things are revealed, it immediately became obvious to me who the culprit was. It didn't help that I have a vague recollection of a similar murder. Not quite the exact method--but close enough that when the culprit appeared on scene I said to myself: They did it--and I bet they [spoiler encoded in ROT13] chg gur cbvfba haqre n qvffbyinoyr svyyvat. Well, they didn't exactly do that but I was in the ballpark and when we're told the basic method, then I knew I was right about the culprit. The other slightly annoying thing is that the culprit leaves a journal written in a rambling, slightly florid style that basically tells us everything we already knew. The few bits that were new weren't amazing enough to require us to read through those journal excerpts.

The thing that saves this story from a low rating is Bellairs' way with characters and description. Littlejohn is portrayed here at his most human--sympathizing with nearly all of the suspects because of their ill-treatment at the hands of the victim. He's even understanding of the Chief Constable's inability to provide the kind of support a man in his position should. And even though I was nearly certain I had spotted the killer early on, it was enjoyable to follow Littlejohn about and watch him work his way towards the solution. ★★★

[If you'd like to decode the spoiler, then copy the coded portion, follow the link, and paste the the code into the box for decoding.]

First line: Perhaps someday a worthy biographer will write the life story of Sir Gideon Ware as a signpost to guide the young to success.

Last line: Stripping off his jacket he assumed his official apron.

Deaths =  6 (two poisoned; one drowned; one strangled; one buried by rubble; one stabbed)