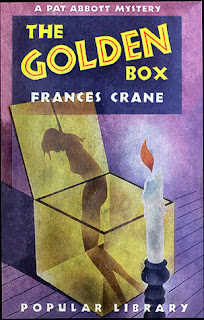 Jean Holly (not yet Abbott) returns to her home town in Illinois to visit an ailing aunt. She hasn't been back to Elm Heights since she left eight years ago to resettle in the artistic community of Santa Maria. But when her cousin Peg (Margaret McCrea) tells her that Aunt Sue has pneumonia, she decides to head back to her old stomping grounds.

Life hasn't changed much in the small Midwestern town--the wealthy Mrs. Claribel Fabian Lake still holds sway in all the circles that matter and generally gets the last word on everything--from the annual church Christmas party to who is appointed coroner. She makes her daughters' lives miserable--refusing to financially help her eldest, Emma, who defied her in her marriage choice (even though it may cost the life of her grandson), forcing Claire's engagement to the chosen suitor and squelching Valerie's romantic plans. When Mrs. Lake succumbs to an apparent heart attack, everyone believes that the daughters will now have a chance at a life of their own...until the will is read. Sure, they're going to share a large fortune...but not until Val turns forty. And that won't be for another twenty-two years

It's not just the terms of the will that are odd. Somebody up at the Lake's home plays music at the strangest times...stopping in mid-chord. One of the inmates of the house is seen peering up in the trees surrounding the McCrea house. The doctor, who declared Mrs. Lake's death as natural and who has received a $3,000 per year legacy for life, is closing his practice and making plans to leave town. Jean's curiosity is on full and she sends her friend Patrick Abbott a message that says that there are events that might warrant his detective interest. He arrives just in time for the second death. Mrs. Lake's maid is found hanged and the doctor (yes, the legacy fellow) declares it suicide and the coroner is all set to go along when mild-mannered Bill McCrea, husband of Peg and inquest jury member holds out for an autopsy. This gives time for Pat Abbott to start nosing around and before we know it, one of the prime suspects, if murder has happened, has hired him to investigate in earnest. Will he be in time to prevent any more murders?

Another solid entry in the Pat & Jean Abbott series. Crane seems to hover right at or just above the three star rating for me. Generally she provides decent plots with a fair number of suspects and clues. Pat, as the official private investigator, does the heavy lifting in the detective department. Jean tends to misjudge people and jump to conclusions--and jumps around on those conclusions, suspecting first one than another of the Elm Heights residents. I really enjoyed the mid-western setting for this one (being from Indiana myself) and I thought she gave us excellent sketches of most of the characters. I might have rated this one higher but for two things. First, I just don't see that the gold box really has all that much to do with our detective arriving at the solution. Why make it the title and bring it up at all if the solution doesn't really need it? [Even though Jean insists it's important and Pat "explains" how it really was the most important clue. I can see how it might have been used in this way, but it really wasn't] And second, I never really felt that there was any other real suspect other than the real culprit. Jean and her cousin bat around some ideas for motives for others, but none of it seemed strong enough. I just wasn't quite sure how our villain managed to be where then needed to be. ★★★

First line: One morning towards the end of November I was sitting by the fireplace in my shop, glancing through a back number of Vogue and thinking it might be a good idea to read a piece on the advantages of being an old maid, when a boy came in with a telegram.

"...I don't see why people bother to fuss about what other people do, unless it's something that hurts them personally. Do you?"  (Clair Lake; p. 92)

Last line: I would probable never read that article in Vogue now.

Deaths = 6 (two auto accident; one drowned; one shot; one poisoned; one hanged)