The Murderer Who Wanted More 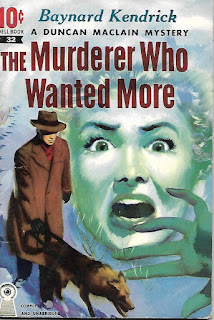 The Murderer Who Wanted More (1943) by Baynard Kendrick

Bonnie Critten was mugged in her apartment's vestibule. A few days later she was walking near woods surrounding her aunt's house when a bullet whizzes by. She is afraid that her artistic imagination is running away with her. But she consults Duncan Maclain, the blind private detective, anyway and he assures her that she's sensible to be concerned. He advises her to stay home and paint for a few days and he'll do some investigating.

Of course, she's immediately called to leave her apartment late at night...and she does. Her aunt has been in ill-health and now the doctor calls to say that the older woman is dying and wants to speak to Bonnie immediately. If she hurries, she may be in time. She rushes to the train station and has the feeling she's being watched--there's a sulky, sinister-looking man in a trench coat who seems to be following her. But she runs into an acquaintance and is happy to have his company for the train journey. She arrives safely at her destination...but someone winds up dead anyway. Her cousin Fred was also on the train and is found shot in the corner of another compartment. Was he the intended target? Or was someone aiming for Bonnie again? And, if he was meant to die, does that mean someone is targeting her entire family? Her aunt dies (of natural causes) before Bonnie can reach the house and there are strange incidents with creaking floorboards and sleeping pills. But Maclain and his dogs show up in time to get to the bottom of the mystery and to prevent the killer from being third time lucky in their attempt to kill Bonnie.

Another solid mystery starring Maclain whose heightened abilities (compensating for his blindness) seem more believable than those of some other blind detectives. I also like the way Kendrick works in Maclain's guide and guard dogs. I will say that I find Kendrick's longer stories to be more enjoyable. This novella seemed just a tad rushed (unlike the similar-lengthed story by Blochman reviewed earlier). There are a few good clues (overlooked by yours truly), but Kendrick is not nearly as generous with them as Blochman was in the same space. Still, a good evening's read and nice addition to the small collection of Kendrick stories I own. ★★★

First line: it started to snow at half-past five in the afternoon.

Last line: Duncan Maclain would never see them, but he didn't seem to care.

Deaths = 3 (one shot; one natural; one stabbed)